At some point in the next couple of years, we’re going to see the Fox-owned flotilla of Marvel characters side by side with the MCU characters. We may even see that in Infinity War in a few months. One of the biggest questions is, of course, what’s going to happen with Wolverine. This week just gone, producer Lauren Shuler Donner made a passing reference to how they’re looking for a younger actor for the role. If that means ‘person best qualified for the role’ great. If it means ‘Generic mid-30s white dude’, that’s a problem.

So here’s the thing. There are at least three X-Men movies that are undeniably good (X-2, First Class, Days of Future Past. That last one may just be for me, that’s fine). There are a lot of X-Men movies that are definitely films that have been made. There is one that is undeniably brilliant; Logan. Removing all the hideous ‘over stimulated 14 year old demanding attention for being edgy’ bullshit from the mini-series it loosely adapts, Logan is a deeply moving exploration of mortality, love and death. It’s brilliant in color and slightly better in black and white and brings a definitive end to Wolveriine’s saga, handing the reigns over to Laura, played by Dafne Keen. Keen is stunningly good in Loganand a major part of why the movie works so well, a tiny intense ball of murder and compassion. Plus the central emotional arc; the aging warrior finding peace and handing the battlefield to the next generation is impossibly powerful.

What happens to that if in six months they announce a mid-30s white guy as the new Wolverine?

Firstly it makes a mockery of the entire emotional arc of Logan. Secondly, it completely sidelines a character, in Laura, who is over a decade old and has established herself as one of the most compelling characters, and strongest cornerstones, of the current Marvel universe. Thirdly, its a massive step back for a studio that’s been making as much noise about how progressive it is as possible for the last year. Presumably to cover up the nine years that proceeded that where it was all white men, all the time.

Laura Kinney’s time has come. Laura Kinney’s time came 14 years ago in comics and she’s only ever become more impressive as time goes by. She’s FUN, in a way Logan almost never was. Unburdened by the decades of interminable continuity and manpain that laid Canada’s grumpiest low, Laura brings a welcome perspective and a serious, grounded approach to a character that too often has been written as knives with vocal chords. Better still, with Laura you get her younger ‘sister’ Gaby! 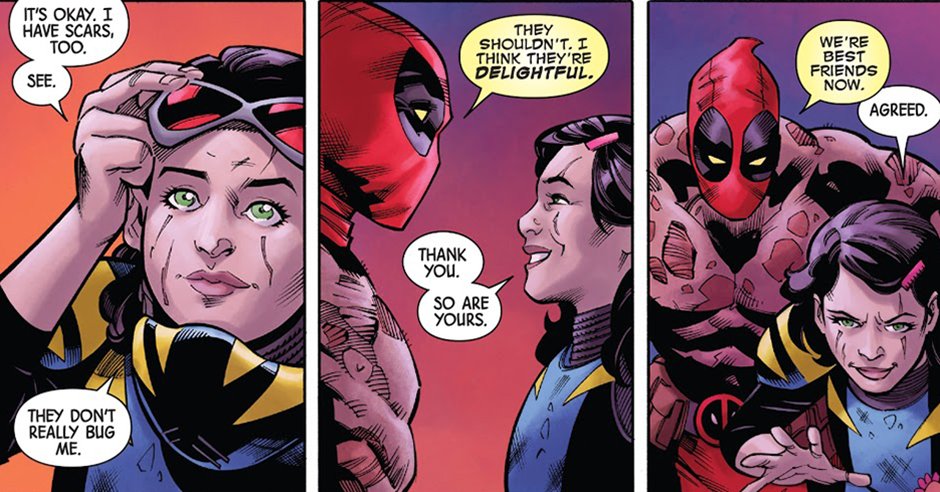 The Tom Taylor scripted run is flat out one of the best comics published so far this century and I’ve written about it here before. As well as being immensely funny and sweet it’s a deep dive into how you rebuild a character this iconic while honoring everything that works about them. It’s Laura solving the violent puzzle of her own past, becoming comfortable with herself in the same way Carol Danvers does in the classic Kelly Sue DeConnick Captain Marvel run. It’s Wolverine as older sibling. Wolverine feeling the weight of the cowl she’s wearing and the violence she’s capable of and choosing when to do both. Wolverine as a representation not of stereotypical man angst and the 1980s action movie aesthetic that too often dominated the original, but of the battle to be better people we all face. Who wouldn’t want to see that? Who wouldn’t hand over money to see Keen, or Anya-Taylor Joy, or any one of a dozen actresses bring the most masculine comic character in history to life in a new, brilliant and feminine way? I know I would.

Let Logan die. Let Wolverine live. She deserves it. And so do we.