Die issue 2 is out this week. It’s from Kieron Gillen, Stephanie Hans and Clayton Cowles with design work by Rian Hughes and edits by Chrissy Williams. If you didn’t get the first issue, get on that now because this is a book that’s fiercely good and remarkably close to home.

Firstly because of the cast. This is a story about bored rural teenagers playing an RPG because they aren’t old enough to get into the pubs and there’s nothing else to do. A group of uniquely familiar, damaged kids who just want to do something that isn’t waiting for University, debt and the job market. This was how I got into tabletop RPGs. These were the people I got into tabletop RPGs with. This was me. 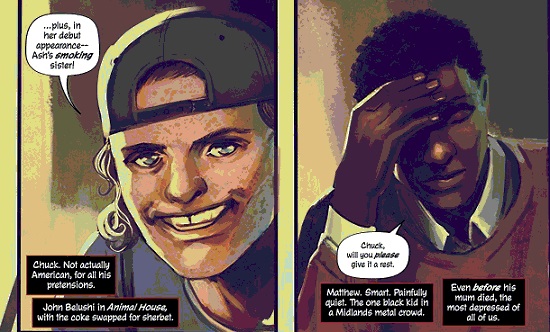 Look really closely in the gutter between Chuck the endlessly chirpy comedian and Matthew the clever, quietly depressed outsider and you’ll see me. A little too clever, a little too self-aware not able to leave a joke alone and  about to dive headlong into the worst experience of my childhood. This page got me. This entire book got me but this opening salvo of amiable and imminently curdled rural teenagers will stay with me for some time.

Secondly because what happens to them is a piece of perfect English Forteana. This is the Cottingley Fairies with a body count. This is a time slipwithout any of the comforting discrediting evidence. These kids go out into the woods that always ring this country, the woods that echo with Godbears, border Rendlesham and powered Holdstock’s work and they don’t come back for a long time. When they do, the only thing they can do is wish they didn’t. The process of grieving, the tired repetition of phrasing and the jet black jokes about avoiding certain relatives all ring true and all hit hard. This is where Stephanie Hans comes into her own for the first time too, rendering the careworn modern cast with remarkable subtlety and attention to human nuance.

Hans givs the book its most terrifying moments too. A blood-stained D20 in a velvet box. The final page, The dice-shaped world. The barely contained sense of joy on the final double page spread with all the horror that entails. Best of all though is her understanding of motion and how it ties to emotional response. The most disturbing page in the issue sees one character do nothing but stalk outside and grab a rock to try and murder the die. It’s pouring with rain, at night and yet Hans captures the adrenaline-staccato pace, the force with which the rock is grabbed and the tears mixing with rain when it becomes clear just how temporary this catharsis would be. Character driven by emotion driven by motion. All of which drives the plot too.

That’s the last thing that got me. The plot is both an elaborate and very dark joke touched on in Gillen’s back-matter essay and also a deeply compelling and horrific idea. What happened if you could go back? What if the door to Narnia never closed? Adulthood and childhood, innocence and terror, good and evil all shaken up and thrown across a table with no idea of what’s going to come up first.

Die issue 1 is available now through your local comic shop or Comixology. Gillen, Hans, Cowles on lettering, Hughes’ design and Williams’ edits are all note perfect. This one’s special. Go get it.