Kristyna Baczynski is one of the most prolific, and unique, artists working in the U.K. indie comics scene. Her work is vibrant, witty, unlike anything else around and essential. She also does an occasional and hilarious podcast with Greig Johnson that is one part space drama, one part de-clluttering and one part pop culture discussion. I’m a big fan and after Retrograde Orbit, her first original graphic novel, a bigger one.

The first time we see Flint, she’s walking her class through the layout of their solar system. She explains about the Stepping Stones, an orbital alignment that will allow people to travel from their world to the beautiful outer world of Doma. Except Doma, where her grandmother came from, was devastated by an accident and nothing can survive there. In one scene, Baczynski flips everything we know on it’s head and tells us everything we really need to know about Flint; she’s brilliant, not in as much control as she thinks and adrift. As someone born on the Isle of Man who even now feels a disconnect from UK culture, this rings especially true for me.

The story unfolds in short vignettes, each following Flint at a slightly different age as the Stepping Stones line up again. We see her graduate, start at the same mining job her mom did, quietly reconnect with her mostly useless father and struggle to maintain her dreams and her day to day life until something unprecedented happens. Along the way there’s a not quite romance or two, various haircuts and the tangible sense of time passing. We don’t view all of Flint’s life because a writer with the skill of Baczynski doesn’t need to show us all of it. Just these essential moments on her path to Doma, each shoving a little harder, each getting her a little closer. 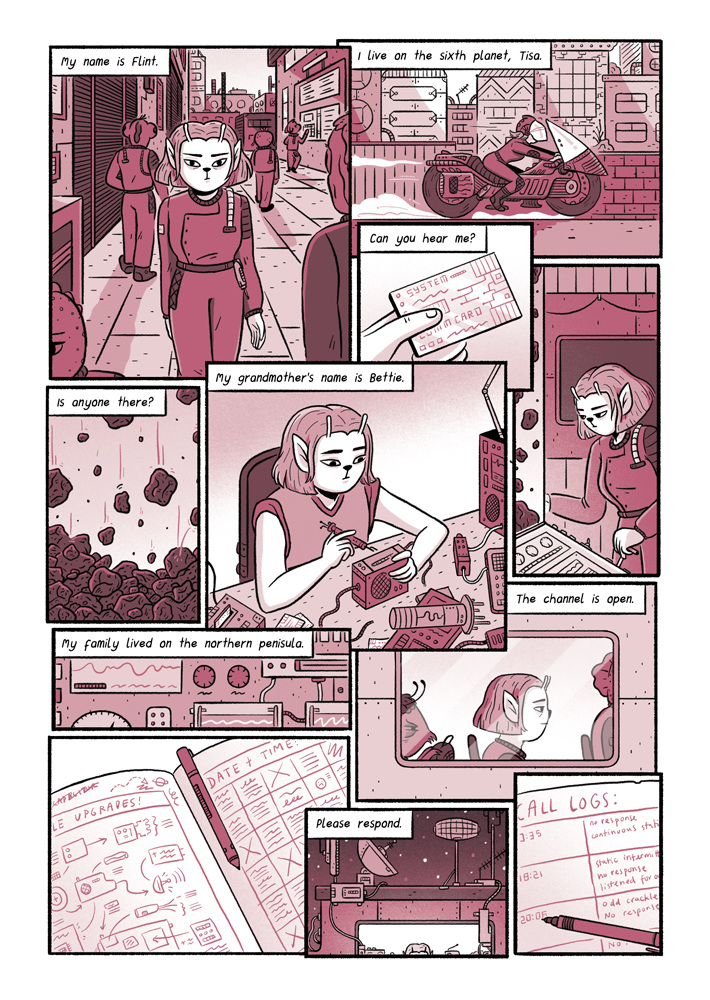 Baczynski’s art is always on point but its rarely been better than it is here. She has a clear eye for character interaction and the evolution of Flint’s relationship with her mother is as sweet as it is realistic and difficult. These are people who’ve had challenge after challenge piled on them and while mom is happy with what they’ve got, Flint wants more. A good writer would leave it there. A great writer, as Baczsynki does, would explore how this is a situation where no one is fully right. Better still, it’s one that never takes any short cuts. Flint is the daughter of a single mother working a blue collar job. There’s no golden ticket, no sudden descent from the heavens. Instead there’s simply life and Flint keeping her eyes on what she wants as the years pass and she moves inexorably closer.  She earns every step, Baczynski makes every page work and the result is a grounded and thoroughly relatable story that’s also convincingly alien.

Not to mention fiercely, bravely honest. Nothing is simple or easy here, because nothing in real life ever really is and the experience of growing up as part of an immigrant family and working blue collar jobs is explored with clarity, compassion and patience. Even the ending is balanced as well as cathartic, either a melancholy note in a happy moment or a happy note in a melancholy one. Life is complicated for Flint and her family and seeing how they deal with that, or sometimes not, makes for a gentle, kind and quietly gripping story.

Retrograde Orbit is about growing up and what happens when you succeed. It’s a story about looking up at night and knowing something’s out there you want to see. It’s about life in a working class family, and the distended scream of adolescence. It’s a story about terrible haircuts, selling your possessions, what you lose and what you gain. It’s a story that will be familiar to many, including me, and reassuring to many more. Most of all, it’s a triumphant gear shift for one of the best creators in the UK and one I hope is just the start of her career in long form graphic fiction. She’s certainly at home there. Clever, funny, kind and unmissable.

Retrograde Orbit is available now from Kristyna herself and her publisher, priced 11.99