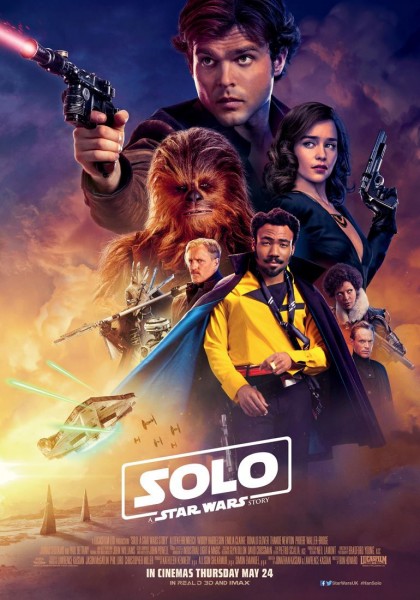 There’s a lot to enjoy in Solo, not the least of which being Donald Glover’s supernaturally suave Lando and Phoebe Waller-Bridge’s magnificently snarly L3-37. Also the things everyone was worried about really aren’t bad. It’s pretty clear a Ron Howard movie, understands Han’s no manner of luck whatsoever and bounces along merrily through ever escalating stakes and set pieces. Plus there are moments where it quietly, politely kicks a hole in the metaphorical speakers. I’m openly astonished that more right wing critics haven’t realized that the most famous spaceship in science fiction has a feminist’s brain yet (I wonder if the Falcon and the TARDIS chat. I bet their WhatsApp group is EPIC). Likewise the reveal on how Han got his name, and the price he pays for becoming who he is. It’s all fun, chewy  stuff. Oh and Alden Ehrenreich is fine. Brilliantly, he becomes more comfortable as Han as Han becomes more comfortable as Han. Actor and character settle in at pretty much the same speed.

But what I enjoyed the most was how clearly Solo, when viewed with Rogue One, cements the feel of this particular time period. Star Wars is now a franchise happening in four very different time frames, including:

And Solo really is a cowboy movie. There’s an aging gunslinger, an amiable cook, a bridge explosion, the collision between heroic myth and grungy reality, even a high noon gunfight. It also bookends The Force Awakens in a surprising way. The Han who dies there is absolutely the Han who smiles, not knowing why Qi’ra calls him ‘the good guy’ here. He’s a man in love with his myth and the tragedy is that myth is what ultimately kills him. Like all the best gunslingers, Han Solo never loses. Until he does.

But the film is as good, if not better, when it breaks away from expectations. The L3 stuff is flat out brilliant, and I can’t wait to see how that gets explored in other movies. Likewise the ending which completely inverts a pair of tropes and explains Han’s longstanding trust issues. Best of all though is the adversary flip that hits at the top of the third act and what follows it. Like the Star Destroyers shot so intimidatingly in these movies, the shadow of war falls over everyone eventually. Han isn’t just a legendary pilot because of his skill but because of when he’s flying. He’s the last of the gunslingers just like Rogue One are the first of the rebels. All of them trapped on the transition from one time period, one type of story to the other. But only one of them whooping with joy as his long-suffering Wookiee buddy watches and they skid sideways and on fire into the future. And, somehow, look good doing it.

Solo is on general release now and is a good time. Go see it if you can.