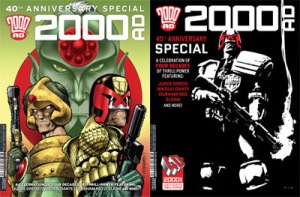 Comics with guitars. Warren Ellis once used those three words to describe 2000AD’s house style and its a phrase that’s stayed with me for years, just like 2000AD itself. Launched 40 years ago today, 2000AD is the comic equivalent of six impossible things before breakfast. It’s an anthology title. It’s weekly. It crosses the genres. It’s never once backed away from dark or difficult choices. It’s constantly reinvented itself and yet, somehow, stayed true to its roots.

And what guitars they are. The title is best known for Judge Dredd of course. The lawman of Mega City 1, one of a handful of mega-cities where the survivors of nuclear war live, Dredd has been many things over the decades. The embodiment of fascism. The embodiment of its anathema. A parodic vehicle and a desperately serious, often desperately sad exploration of life in the big city. What Dredd you like will change depending on where you stand and the series has always taken great pains to provide something for everyone. I tend to steer away from the frequent pop culture satire Dredd stories, but I am there all day for the police procedural stuff and the thematic epics. America, published an astonishing 27 years now, remains one of the series’ finest hours. A love story, a street level look at the Judges and an ethical dissection of the world of the series, it’s a story that few other comics would be brave enough to try. For Dredd, it formed a cornerstone of three decades of exploration. More recent stories have seen Dredd’s age, his presence on the streets and the nature of the City itself called into doubt. The world has changed, irrevocably, over and over again and yet somehow it still finds a place for every reader. If you’re in it for the ultra violence, the pop culture, the jokes, the art, the story? There’s a place for you in Mega-City 1. Just don’t break the rules.

But 2000AD is successful because it’s always been more than one story, more than one man. Over those four decades, countless other characters have risen, fallen and risen again. Grant Morrison and Steve Yeowell’s Zenith remains one of the definitive superhuman stories of all time. Henry Flint and Al Ewing’s Zombo is an exuberant take on undead fiction that wraps comedy, horror and influences as diverse as Aguirre: The Wrath of God and Pitch Black around Flint’s deceptively friendly artwork. Finally, Gordon Ronnie and Dom Reardon’s Absalom is a copper’s copper, a scabrous old police inspector who knows everything about the bizarre underside of London and probably gets drunk with Gene Hunt, Peter Grant and DI James Quill and his unit. Horror, science fiction, fantasy and comedy are frequently on the same page at the same time with 2000AD, or waiting patiently in line for their turn in the spotlight.

And speaking of spotlight, the series has featured a veritable murderer’s row of definitive comic talent. Dan Abnett, Simon Bisley, Phillip Bond, Alan Davis, the late great Steve Dillon, D’Israeli, Garth Ennis, Grant Morrison, Si Spurrier, Frazier Irving, Jock, Alan Moore and countless others have either learned their craft or made their mark inside the covers of the Galaxy’s Greatest Comic. The British comic scene has always been relentlessly creative, hard working and vibrant and 2000AD has been the backbone to almost all of that.

Four decades of content is a hell of a lot and it gives every reader a chance to make their own way through the vast amount of stories on offer. I came online with 2000AD fairly late, and gravitated pretty quickly towards both the serious Dredd stories and Rogue Trooper. The story of a genetically infantryman (G.I.) created to fight a war on the hellish planet of Nu-Earth. Rogue’s entire regiment were slaughtered on their first deployment due to a traitor in their command structure and he was the only survivor.

Well…the only whole one.

Each G.I. Was equipped with a biochip that contained a backup of their personality. If the chip could be cut from their corpse fast enough it could be slotted into another G.I.’s backpack, helmet, or gun. There, the chip would enhance the abilities of the equipment and help keep their saviour alive long enough to get them downloaded into a newly cloned body. It’s a gloriously nasty concept and one that managed to balance the cheerfully savage violence that my teen self greatly enjoyed reading with moments of surprising poignancy.

That combination would be built on by two later series. Hilary Robinson’s Medivac 318 was a criminally underrated, and unfairly cut short, series dealing with casualty evacuation teams in a futuristic war zone. One particular episode, which featured one of the leads trapped in a downed ambulance with a soldier who could only say ‘No’ remains one of the most memorable pieces of comics storytelling I’ve ever seen. Illustrated by Nigel Dobbyn, the series was an early marker for the sort of story 2000AD would grow into. Later series Mercy Heights, written by John Tomlinson, played with very similar ideas but did so with both the editorial blessing that Robinson for some reason lacked and with overt connections to Rogue Trooper. Both series are absolutely worth reading, and both provide a welcome dose of humanity and compassion to a comic that, for a lot of it’s past, has been more concerned with telling macho stories than good ones.

But all that changed two editors ago. Andy Diggle, and his successor and current editor Matt Smith, have taken a two stage approach that’s paid dividends. Diggle refocused the title around its core characters and ideas while Smith has used too to take it to places it’s never been before. Under Smith’s editorial control, the first woman in the history of the comic wrote Judge Dredd and his willingness to push the expectations of both format and established audience have paid off time and again. Dredd’s world in particular has benefited hugely from both the moral and political grey areas of 21st century fiction and from Smith’s willingness to give his writers room to experiment. That led to Trifecta, an exuberantly inventive three way crossover which saw Al Ewing, Si Spurrier and Rob Williams combine Judge Dredd and spin-offs The Simping Detective and Low Life.  The fact the crossover wasn’t apparent until one panel in one story led directly into the first panel in the next just made it all the more impressive.

Comics with guitars. For the last four decades those guitars have been played by some f the greatest comic creators in the western world and have given us some of the best and most important tunes. As 2000AD rounds the corner into its fifth decade, it has honestly never looked better. The expectations of a longstanding audience are being balanced by an engagement with a new one, and a new wave of creators whose voices look set to turn the most important comic in the UK on its head once again. So here’s to 2000AD and comics with guitars. Happy birthday. Now, turn it UP.