I remember, years ago, traveling to a friend’s wedding to serve as an usher. We arrived the night before and stayed over and, this being the early ’90s in the UK on a Friday night, I of course ended up watching Top of the Pops. For the uninitiated, Top of the Pops was one of those televisual stalactites, accreted over decades, that British TV excels in. Running between 1964 and 2006, it was half hour pop music show, it was infamous for featuring the most obvious taped performances in history, except for a brief, courageous and disastrous experiment where it had performers work live. Even now, like Christopher Lee in a Dracula movie, it lives on as a yearly Christmas special, a companion show and later this year, a webcast. We may build TV cheap over here but we build it durable and tough too.

Anyway, this particular edition came at the end of one my first periods of voluntary exile from pop music. I do this quite a bit because it’s like learning a language all over again. You go away for a while and when you come back the landscape’s changed and you get to have fun forging your new paths through it. Think of it like the game that starts with the Giant in Ender’s Game only you can hum a lot more of the tunes and eventually Nicki Minaj happens. Not saying that’s a good thing but I digress. I caught this episode, and recognised one band in three and then at the end, the Spice Girls played.

Well…you get my drift. They did this on the Great Wall of China. I still don’t know why. They were…completely unlike anything I’d seen before, an explosion in a bubblegum factory, a piece of endearingly lewd graffiti written across the wall in lipstick. They were also, frankly, pretty lousy even with the lip synching. But they were new, they were different. They struck a note that started in the background and rose in volume and pitch until it was all you could hear for a while. That’s what pop culture does and I’ve never forgotten that feeling, that sneaking suspicion that I’d seen something massively important a little early. It’s a good thing to notice, a good skill to try and cultivate, especially doing what I do.

I’m starting to notice it again.

This time, with comics and mixed martial arts. The two have always had a certain measure of stylistic crossover. Fighters like Jason Miller revel in the theatrics inherent in the sport and MMA and professional wrestling have always had the sort of relationship that either ends with screaming and broken glass and recriminations, waking up nude at 3pm wrapped around one another or both of the above. Comics love theatrics and big personalities so do fight sports, often more than actual in ring ability. Plus there’s a drama inherent in combat sports that there frequently isn’t anywhere else. It’s not the nihilistic desire to see someone bleed or get seriously injured, at least not for me, more the idea of sport as crucible. You test yourself, physically, to the ultimate degree and if you’re still standing at the end, that’s a victory and if you’ve won? That’s a flawless victory. It has a lot of appeal, and for a long time one of my several half-formed plans was to get fit enough to take a single amateur MMA bout just to see how I’d do. Times change, reality impinges on fantasy and that particular idea has been hung up next to getting my Judo black belt by the time I’m 40. 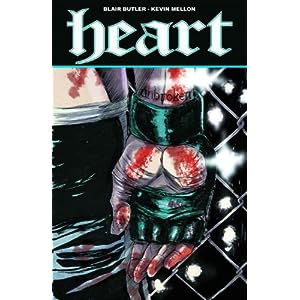 Which brings us to Heart and Joe Palooka. Heart, written by Blair Butler with art by Kevin Mellon, is one of the best kept secrets in comics this year. The story of a young amateur MMA fighter who decides to turn pro, and what happens when he does, it’s a very human, very funny, bloody nosed look at the fact that we all love a fighter and we all love an underdog, but for how long? It’s quietly an incredibly brave piece of storytelling, playing with very traditional masculine tropes with a combination of intelligence, compassion and humor and in terms of sheer characterization is one of the best comics you haven’t read this year. Which, is where, odds are, it would stay if the book existed in a vacuum. Comics are notoriously resistant to large-scale change, which is why I was very pleasantly surprised to see IDW announce the relaunch of Joe Palooka.

The character was originally created in 1924 by Ham Fisher, and was a heavyweight boxer inspired by real life fighter Pete Latzo. Fisher describes him as:

‘Here, made to order, was the comic strip character I had been looking for—a big, good-natured prize fighter who didn’t like to fight; a defender of little guys; a gentle knight. I ran back to the office, drew a set of strips and rushed to the newspaper syndicates. ‘

The strip was carried by over 900 newspapers, and led to a radio series, a comic, a series of movies and a TV show. The character seems to have been an influence on Sylvester Stallone’s Rocky series, along with real life fighter Chuck Wepner, and ‘palooka’ was used as a slang term for a boxer up to and including the 1990s when it’s referenced in Pulp Fiction; Everyone, it seems, loves a fighter.

Ring Announcer Joe Antonacci certainly does. Antonacci has purchased the copyright for the character and relaunched him as a disgraced Mixed Martial Artist. Written by Mike Bullock, with art by Fernando Peniche and Matt Triano and letters by Josh Aitken with Bob Pedroza on colors, the title recasts Joe as a man fighting to clear his name whilst travelling the world and fighting to earn a spot in a team MMA-event called Legion of Combat. The premise isn’t particularly grounded, certainly, but the idea has real merit, especially as Antonacci has stated plans to feature Ultimate Fighting Championship fighters in the comic. This is the exact opposite portrayal of fighters to the one in Heart; as larger than life figures that sit halfway between fiction and reality but both have merit. Plus, if the UFC give this even their tacit approval then the comic becomes inextricably tied to one of the most successful sports of the last thirty years which in turn massively raises it’s profile which in turn massively raises the profile of the comics around it. Heart opened the door, and if Joe Palooka is successful then the two titles could pave the way for sports comics to be viewed as a legitimate commercial and artistic prospect again, with all the opportunities that would bring with it.
I have that tickle at the back of my mind again, the one that says pay attention, this is going to be important soon. Because, suddenly, the sports comic, and specifically the fighter comic, looks set to be back in title contention and if Heart and Joe Palooka are any indication, this fight can only end with a knockout.