I’m a Child of the Atom. Everyone my age and older is, because we grew up under the very real possibility of nuclear war. It was, in many ways, my first exposure to the idea of something larger than me; that a war could be so huge it would reach across the Irish Sea out into my life and turn a small, meaningless island into glass because it had an airport and therefore had potential strategic value. My father talks, even now, with tremendous emotion about the Cuban Missile crisis and how, when one rehearsal broke up, everyone said goodbye in the near-certain knowledge that they wouldn’t see each other again. My mother recalls, equally vividly, the desperate trust many people had in President Kennedy and his ability to bring the situation to a close, or at the very least, to defend the West in the event of the missiles flying. I’m not a child of war, to even claim that borders on the louche, but I’m a child of the shadow of war. It changes you, puts you, ironically, square in the middle of the no man’s land between the Hawks and the Doves. I’m extremely liberal but I have friends and family who serve, respect and admire them and accept they’re utterly necessary. That line from A Few Good Men about soldiers; ‘They stand on a wall and say nothing bad’s going to happen to you tonight.’ Is absolutely true for me.

At the same time, I’m acutely aware that I’m only alive because of Stanislav Petrov. In 1983, Petrov was a military officer in charge of monitoring satellite surveillance equipment and report launches up the chain of command. An apparent five missile attack was detected and Petrov, a man who if not responsible for starting the war was certainly one of those responsible for opening the stable gates, chose to call it a false alarm. He had no supporting evidence for the launch, had always been told it would be clouds of missiles instead of just five and, with the literal weight of the world resting on his shoulders, said no. He was proved right, and after being questioned extensively, was promised  a reward for his actions. It never came and Petrov suffered a nervous breakdown before, finally, retiring. The United Nations gave him a World Citizen award in recognition of his decision and he now lives peacefully in Fryazino, in Russia.

A single person, with history on their back and years of training, makes the brave decision instead of the one their every instinct is screaming to choose. I can’t think of a better definition of courage. 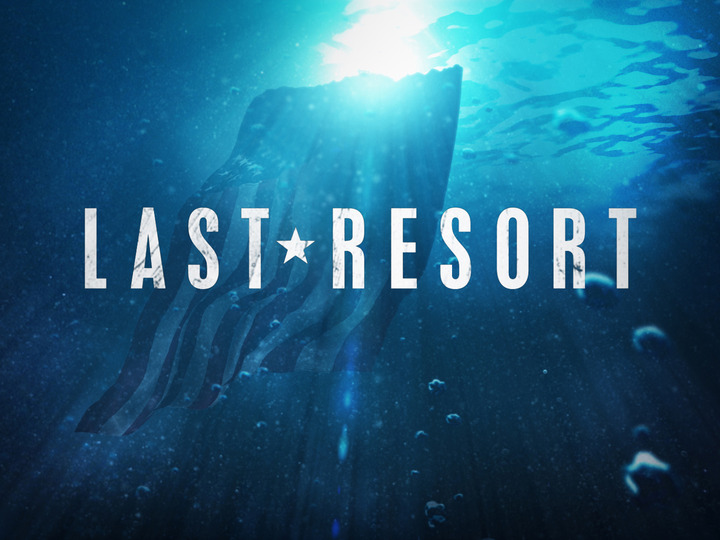 (Image courtesy of Once More With Geekery)

Last Resort takes the same idea; the man who says no in the face of overwhelming pressure, and twists it into something both more familiar and infinitely more subversive. Here, the man who says no becomes the men who says no; Marcus Chaplin and Sam Kendal, the Captain and XO of the USS Colorado, a US Navy nuclear submarine. Chaplin, played by Andre Braugher, is older, calmer and all but unflappable whilst Kendal, played by Scott Speedman, is younger, troubled and feeling the pressures of endless tours of duty on his marriage. The two men are a seamless double act at the head of a competent, happy, focussed crew. They’re home, kings of their small, pressurised kingdom and the show neatly sets this up as being their strength and weakness. News bulletins showing the President under threat of impeachment at home are seen in passing, the Colorado is dispatched to extract a team of Navy SEALs being pursued out of Pakistan and the two men, whilst curious, accept their roles. Good sailors, good officers, always do.

Great ones know when to say no, and both are given the opportunity when an order to fire on Pakistan comes in. Both do what they do, both authenticate the order and both…say no. Because the order comes in through the Antarctic Network, a system designed to only be used in the event of Washington being destroyed. Once they confirm this is not the case, Chaplin asks for confirmation on the order. In response, another American sub attempts to destroy the Colorado.   Chaplin and Kendal have no choice but to make repairs and find somewhere to hole up. Chaplin chooses the island of St. Marina, home to a NATO listening post and a small community of people, including a drug smuggler and crime boss. An island state. A pocket empire, with Chaplin and Kendal’s own pocket empire, the Colorado, parked in the bay.

This is familiar because, as I say, I’m a child of the Atom. I watched a nuclear submarine, or Boomer, surface off the Isle of Man when I was 12, and know exactly how capable of massive destruction they are. The central premise is familiar too; ground trod with tremendous aplomb by the late Tony Scott’s superlative Crimson Tide for one. Likewise, the conspiracy that led to the attempted murder of the Colorado’s crew, not to mention the inconceivable slaughter in Pakistan, feels one part The X X-Files and one part Prison Break, a fact not helped by the presence of genre stalwarts like Bruce Davison in the cast or the initially horrifically misjudged plot involving Kylie Sinclair, a Washington-based weapons lobbyist with a vested interested in the Colorado. For the first twenty minutes at least, this feels like The West Wing with added uniforms and occasional nuclear terrorism.

What becomes clear as the series progresses, however, is that the show is anything but familiar. Like the crew of the Colorado, we find ourselves out past the red line in the rarefied atmosphere that lies between genres. This is definitively a military thriller, and Shawn Ryan, the show’s producer, has the pedigree for it following his exemplary work on The Unit, but as the Washington plot develops something else comes to the fore. This is that rarest kind of story;  one exploring what happens just before a dystopia. The banal, passive evil of The X-Files’ conspiracy is nowhere to be found, replaced by snatches of information and hints that the world is moving far faster than Chaplin, Kendal or any of the others have the slightest inkling of. Deputy Secretary of Defence Curry becomes Secretary of Defence overnight, the Pakistan assault is acknowledged but somehow absorbed, becoming part of what seems to be a larger strategy and even on the island the crew aren’t safe. Julian Serrat, the local gangboss, goes from joke to credible threat inside three episodes and is used to neatly demonstrate exactly how fragile a position the command crew of the Colorado is in. They have an early warning system, they have land and they have the world watching them, waiting for them to make a mistake. They also have near-open mutiny in the ranks, which escalates as the show continues. By the third episode, XO Kendal is having to break up a fight between crew and islanders at gun point, by episode 5, Chaplin is forced to talk down an attempted hijacking and post a STAY/GO list for the crew to sign so he knows how many people he has left. These men literally have nowhere left to go, and Chaplin, for all his stentorian tones and effortless authority, is a King without a kingdom, whose subjects are deserting.

The show only twists the knife from there, with the second episode, ‘Blue on Blue’ dealing with Kendal’s attempts to meet a team of Delta Force special forces operators dispatched to the island to kill the Colorado’s command staff. The entire episode is built around the fascinating, and horrifying, premise that because they did the right thing, Kendal will have to lead a group of sailors into a gun battle not only against highly trained soldiers, but highly trained American soldiers. The fact he does is surprising, the fact that he attempts to negotiate with the Deltas is more so and the reveal, with Kendal standing weaponless in a field surrounded by soldiers, that they are in fact Russian Spetsnaz is extraordinary. There are no easy answers here, no public agendas, only the desires of a government that is in the process of being taken over and a group of people attempting to navigate the marshy ground of being good warriors, of standing on the wall for their country.

It’s not just Chaplain and Kendal who are struggling either. Grace Shepard, a senior officer  struggles to gain the respect of the crew following her shooting of a mutinous crewmember whilst Chief of the Boat Joseph Prosser tries to hold true to what he believes are the right orders, even in the face of an apparent betrayal by Chaplain. In Washington, Admiral Shepard, Grace’s father, struggles to exonerate his daughter and her colleagues whilst Kylie Sinclair balances the needs of her family’s weapons business with the growing sense that she’s in way over her head. Finally, on the island, Navy SEAL James King drinks to kill the pain at the awful thing he and his men did in Pakistan, Tani Tumrenjack sees her bar gain a lot of very uniformed new customers and Julian Serrat waits for everything to come back around to him, as it always does. The world slides further into turmoil and, in microcosm, the same thing happens on Sainte Marine. Things fall apart, the centre cannot hold and the falcon can hear the falconer, he just chooses not to come back.

If the show finished with this premise that would be fascinating but what tips it over into extraordinary is the constant unpacking of the events we’ve already seen. Kendal is revealed, quietly, to have PTSD bad enough to contemplate suicide by Delta Force, Shepard is prepared to die in battle to prove herself and Chaplain is grieving the loss of his son, a soldier, to friendly fire two weeks previously. Even King, all swagger and casual martial skills sobs uncontrollably when he sees a news report from Pakistan saying ‘That was me. I did that.’ Over and over again. None of these people are well, all of these people are differently broken and there’s almost no way this series can end well.

As a result, it’s one of the most unabashedly gripping pieces of TV I’ve seen in years.  Whilst it’s critically acclaimed the ratings for Last Resort are almost certainly not good enough to justify a second year and if anything, that’s a good thing. This is a short run story about good people in a horrific situation, and a show consistently brave enough to explore that idea to the full. Take this, the closing speech from the pilot, delivered by Chaplain to the world following his launch of a nuke over Washington to land harmlessly in the sea.

Want to talk? ME TOO! Come see me on Twitter at @alasdairstuart or email me.