Al Dente: You got any Taquitos?

Yes, little buddy. Yes I do. FIRE THE CONTEXT CANNON!

Right then, Invader Zim is a gleeful cartoon series about a profoundly incompetent member of a race of professional alien invaders, the immensely defective robot he works with and the planet he continually fails to invade. This one. The robot is Gir, who you see in that top Youtube clip and is known for two things; his tremendous capacity for self amusement and his huge fondness for food.

So what are Taquitos, I imagine you asking? Well, audience in my head I am glad you asked!

A Taquito is a Flauta.

Actually its a Taco.

And yes I am just being awkward now.

It’s a rolled taco, which means its a Tortilla wrap that’s got filling that’s usually cheese and STUFF (Chicken, Pork, beef etc all count as STUFF) and various other things in it. Then, if you have a deep fat frier, you fry the thing and once its cooled stuff into your facehole like the tube of delicious meaty cheesy mexi-joy it assuredly is.

If you know just how often you would use a deep fat frier if you had one? Then you do it a little differently. Victor! The usual suspects!

Well that’s new. Yes! It’s an actual recipe! I don’t make this stuff up (Well, aside from that one time with the HobNob, Thousand Island Dressing and cheddar sandwich but the WORLD IS NOT YET READY FOR THAT) and it’s a great site. Go, take a look, try some stuff, eat some stuff. 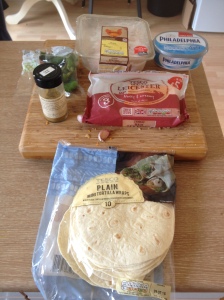 So, let’s talk about the scary part of the recipe first. Because it’s not like we’re going to use all of them, right? 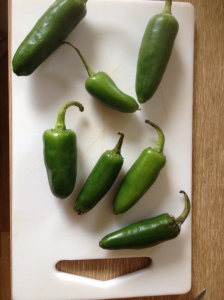 THE DOORS ARE LOCKED SPICE-O-PHOBES. YES I PUT DOORS ON THE INTERNET BE QUIET THAT’S A THING I CAN DO NOW.

Seriously though, speaking as someone who’s interactions with the Chevys menu are closer to gastro-intestinal diplomacy than they are to an all you can eat spicestravaganza, I sympathise. Especially as this recipe does involve a third of a cup of jalapenos which is everything you see here.

So how do we minimize the pain and maximize the deliciousness?

Well first, don’t do this: 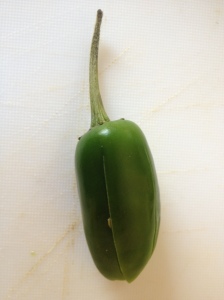 This is a really cool way of chopping jalapenos where you keep the stem intact, make two lengthwise cuts and then chop at 90 degrees up to the stem. It gives you gorgeous, uniform vegetables and it absolutely positively guarantees that the internal flesh and seeds cannot be removed. In other words? Do this if you want to go to DefCon SWEET JESUS MY FACE. 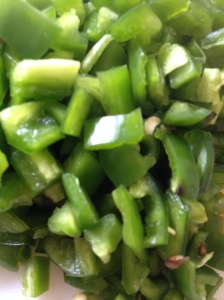 Victor is going through an ‘arty’ phase at the moment so, whilst those look like you could beat a whale to spicy spicy death with them the pieces are actually properly teeny. Chop up, move ’em to one side, WASH.YOUR.HANDS. and on we go. 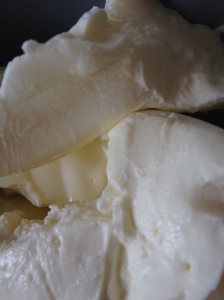 This is not just Philadelphia. This is…actually it’s totally Philadelphia but crikey Moses if that isn’t the prettiest photo of a huge-arsed lump of cream cheese I’ve ever taken. When the Guardian Sunday Food Supplement checks it’s rolodex for SPECIALIST PHOTOGRAPHERS: LUMPS OF CREAM CHEESE (HUGE ARSED), who are they gonna call? After the Ghostbusters? Hell yeah. 8 ounce of artfully photographized cream cheese, right there.

You’re probably thinking that’s a bit much. If you are, do me a favor and read this:

Yeah. You need the cheese. Embrace the cheese. The cheese is your friend. Wear it. Do not let it wear you. 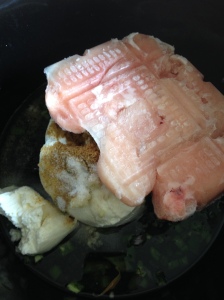 Much like any TV show with a great pilot episode might get a bit wobbly, any food that looks pretty straight out of the gate is not to be trusted. This looks like three frozen chicken breasts drunkenly groping a lump of Philadelphia that’s stumbled over a puddle of Jalapenos. It is not a pretty meal at this point. It is in fact a meal that you expect to mumble ‘I fuggin love you…you’re ma bes’mate…yu’bastur-ZZZZZZZZZZZZZZZZZZZ’.

It won’t (If it does, RUN) and it will look better, promise. So:

-Half a cup of water.

-Jalapenopocalypse (Or one third of a cup)

In a slow cooker, on low for 6-8 hours. Also, top tip top tip fans! Put either silver foil over the top of the cooker under the lid, or baking parchment. This traps a little more of the heat although does mean you’re playing Boiling Hot Water Slalom if you use baking parchment. 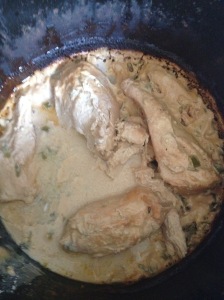 So, periodically over the 6-8 hours, check in. You’ll be reassured because everything will mix down quite naturally and start to smell so ridiculously amazing. Seriously, a lot of the recipes I make I make because of how good they make the house (Also, my office) smell. This one was full on ‘cartoon wafts of scent carrying me downstairs by the nose’ level good. 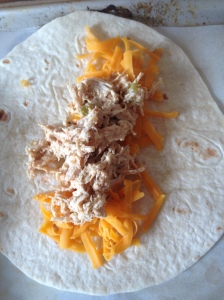 So, 6-8 hours pass. You see a movie. You write some stuff. You drink some tea. I ask what you’re doing in my house. The usual. Then, once its ready you decant the chicken breasty/jalapeno goo into a bowl, get two forks and attack the structure Wolvie Berserk Style.

Once you’ve done that (Or 6-8 hours earlier if you’re all efficient) grate a half cup or so of cheese. Then, lay your tortillas out flat, sprinkle some grated cheese on top, sprinkle some mix on top of that and roll them. This is the hard bit because you have to roll them pretty damn tightly. What the American Cultural Expert in the house suggested was tucking the filling to one side, rolling them tight and making sure the edge of the tortilla is on the bottom when you’re done. That way gravity, and deliciousness, hold them in place.

Then, pre-heat your oven to 180 degrees, lay the Taquitos out on a tray and mist them with olive oil. That way you get the crispy texture you’d get from deep fat frying without the awkward moment where you’re caught licking batter crumbs out of the bowl and claim you’re ‘washing up’. 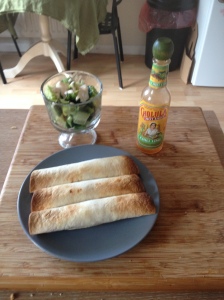 That’s a Cucumber and Avocado salad by the way and an empty bottle of hot sauce. Not because it’s in the dish we just really, really loved that hot sauce. Anyway, don’t they look great?! And they taste amazing because the cream cheese cuts a lot of the heat off the Jalapenos, while the Jalapenos ensure it doesn’t taste like you’re eating a liquified version of Ikea. Everyone wins, especially your face!

What do you think, Gir?