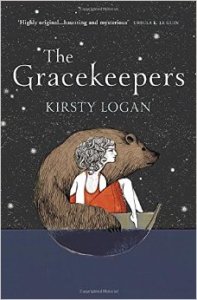 Callanish is a Gracekeeper. She tends the Graces, the fragile birds who serve as stand in mourners for the survivors of the dead. The life she lives is lonely and difficult and it’s the only one she thinks she deserves. Because Callanish is certain she isn’t fully human.

North and her bear dance in the Circus Excalibur. Raised in the circus, she has no family that doesn’t smell of greasepaint and no life outside the shows, her bear and the growing sense that there should be more. Engaged to the son of the circus master, North is terrified that her tiny atoll of a life is about to be invaded. And she’s right.

Kirsty Logan’s debut novel is extraordinary. The concept of personal space is encoded into the novel’s structure at every level. It’s especially apparent in the uniquely polite post-apocalyptic world Logan has created. After a massive global flood, there are two human cultures; landlockers and damplings. Landlockers are those born on land who guard it jealously and can’t conceive of life on ship. Damplings hate the thought of being trapped in one place and revel in the tolerated criminal status Landlockers assign them. It’s exactly the sort of polite, grudging, no eye contact human nature that you see on every kind of public transport on the planet. As a result it’s simultaneously familiar and immensely alien, giving you a handle on a world that could otherwise feel unfamiliar.

With the world laid out like that, Logan cleverly refuses to give you specifics. Much like the stunningly good Fury Road, we get the consequences of the disaster rather than the cause, and Logan trusts us to put those pieces together. So, the floating dictatorship of military vessels is touched on as is a chilling interlude on a clinically clean cruise liner turned religious ship. Everyone is struggling to define their own personal space, no one has enough and everyone is poised to fight for it at a moment’s notice.

That’s what makes the characters so compelling. North is a gentle, taciturn lead whose familial bond with her bear is all the more affecting because of how all pervasive it is. So when her life, not physical but emotional, is threatened, North struggles to protect her tiny space and the creature she shares with it. North’s issue is not defending her personal space so much as accepting its growing and doing something about that. Seeing her do it gives the novel a solid emotional charge that’s surprising in both strength and poignancy. Logan makes you care about this curious world and the curious girl at its heart and care desperately.

She also makes it clear North needs all the help she can get, as does Callanish. Where North’s problem is too much attention, Callanish’s problem is not enough. Banished, in a way, to the Gracekeepers, she’s North’s polar opposite. One of them pretends to be like everyone else in front of an audience, the other pretends to be like everyone else by hiding from as many people as possible.

Worse still, she’s unclear about her faith and unable to see how good she is at her work. Callanish diligently tends her birds, offers comfort where she can and tries to be a good Gracekeeper. That’s harder than it seems as we find out in a series of scenes dealing with the next Gracekeeper in the network, a drunkard who can’t cope with the loneliness. Callanish is trapped four different ways; on her island, in her profession, in her misplaced guilt and in her inability to see how good she is at her job. In one character, Logan not only embodies the themes of the book but explores the consequences of her world and writes with heartbreaking clarity about Impostor Syndrome. Callanish is so much better, and stronger, than she thinks she is and the book’s strongest scenes deal with her self-perception gradually shifting towards something if not more positive than certainly more proactive.

Even other characters are constantly struggling to maintain their own scraps of stable ground, whether Dampling or Landlocker. Jarrow, the ringmaster can’t see past the myths he’s built about his son, marriage and future. Callanish’s mother is locked into a circuit of memory that is defined and accentuated by the island she lives on and the messenger Callanish reluctantly befriends embraces the expectations of him so fervently he almost convinces himself they’re true. They all defend themselves, all maintain, each folded into permanent emotional triage due to the world they live in. Logan creates a world where men and woman alike really are islands and shows us the awful cost of that for those characters who defend their personal space by attacking that of others.

But Logan also shows us what happens when we move outside our space, when we dare to reach for something else. Callanish and North want something more and they create it together. In doing so, they find not invasion but expansion. They’re no longer islands, they’re a single, larger island, and stronger for it.

The Gracekeepers is a subtle, nuanced and remarkable piece of work. It wraps personal space, impostor syndrome, romance, horror and a meditation on grief around a story that’s deceptively simple but, dampling or landlocker, always has its feet set. One of my books of the year.