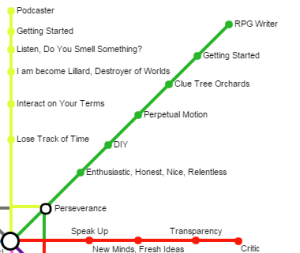 I’m coming up on ten years at Pseudopod. In that time I’ve met and chatted to tons of listeners. They are for the most part absolutely lovely people. The show introduced me to the love of my life. I mean, as audience quality goes you don’t get higher than that.

In that time, I’ve interacted with, maybe, four trolls.

I can quote you every single line of every single thing they said about me. Especially the guy who claimed I was an Australian, an insult so esoteric that I honestly think it circled the Earth and became a compliment.

You’re going to get an audience. You’re going to interact with that audience and most of the time those interactions will be great. Some won’t. You’ll remember those and you won’t be able to avoid them.

But what you can do is minimize how many of them you have. Engage with your audience, because it’ll make an immensely personal medium even more personal. But set boundaries, set rules and stick to them.

Here’s how Escape Artists does it:

–All three shows have Facebook pages that have thriving communities on them.

–All three shows have presences on the forum, via the mod team run by the fantastic Eytan.

Two of the three Facebook pages are run by staff, one of the three editorial teams has a forum presence and the Twitter accounts are all run by staff. Each show has hit the wall, at different times and places and adapted accordingly. You don’t have to always be on. So don’t always be on. It’ll be healthier for everyone, trust me.

Personal space is vital and healthy. Choose how you engage. Choose where you engage and know that every time you do you have the option of disengaging and you’ll be fine.