A Most Violent Career-How a Die Hard Prequel Could Work 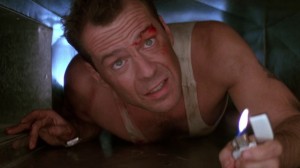 A couple of days ago it was announced that Die Hard, long-running bald man shoots people action franchise, would be getting a prequel, Die Hard: Year One. Which is also apparently a sequel. The word is that the film will be the origin of John McClane starring a younger actor in scenes set in 1979. However, those scenes will be book ended by stuff with Bruce Willis in 2017/18.

As was always going to happen, this was met with hoots of derision. Partially because everything, ever, is met with hoots of derision on the internet and partially because it’s a really bad idea. As several people pointed out, the secret origin of John McClane is simple, he’s an asshole NYPD cop who couldn’t deal with the fact his wife wanted a career in LA. Lather, rinse, kill a Gruber brother, throw in a Kevin Smith cameo, repeat.

But, there is a way to do it which is both interesting, different and adds to the series in terms of quality rather than amount of hours people have to sit through. To do that it needs to buck the meteoric trajectory of every major action movie across the last few decades. A trajectory that looks like this: 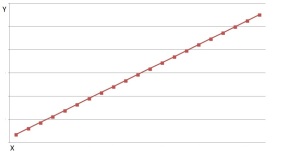 X in this instance is spectacle and Y is budget. Imagine as the starting point Harold Lloyd hanging off a clock tower and the end being the rumoured billion-dollar budget for Avengers: Infinity War 1 and 2.

The bigger the budget the bigger the scale so everything gets larger and more complex and explodes way more loudly. Which is fine, until the next movie. So you turn the volume up even more and blow up even bigger things and suddenly you’re in an arms race with people’s expectations. One where the first casualty is emotional investment and the second is the true nature of the very characters you’re building your explosionfest around.

Live Free or Die Hard is a perfect example of this as it contains both one of the best, and one of the worst, moments in McClane’s on-screen career. The fight with Maggie Q’s character is a perfect character beat because while the people and threats he’s facing have changed, McClane hasn’t.  He’s an old school police officer who gets his ass kicked so completely by a world class martial artist that he has to run her over and down a lift shaft, then drop a car onto her which then explodes. The fight psychology behind the scene is really smart; he’s a fossil, an old school cop who’s saved by tenacity rather than ability. As my friend Andrew Reid put, McClane’s an amazingly gifted improviser and that’s saved his life more than once.

And then about an hour later he fights a VTOL fighter aircraft and wins.

This is the problem the Die Hard movies have run headlong into and it’s one that’s very difficult to solve without rebooting. And rebooting is a process that’s even riskier than increasingly anaemic sequels. Do it right and you’ve won over an old audience as well as winning a new one. Do it wrong and you’re Joel Schumacher putting nipples on the batsuit.

So how do you do it right? 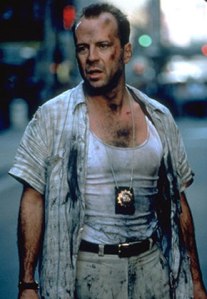 You don’t make it a Die Hard movie. You make it a John McClane one.

Canonically, McClane’s been an NYPD officer since the ‘70s. The action movies of the 1970s included New York-based, bloody knuckled classics like The Warriors and The French Connection. Use that, have the flashbacks based around that kind of intimate, character-driven, brutal story. Show us the man by showing us the stories that he, and the movies he’s the centre of, were built on. Make The French Connection’s Popeye Doyle McClane’s training officer, have McClane as one of the officers investigating the disastrous events of The Warriors. Have him work under Lt. Frank Ochoa from Death Wish and struggle with whether his CO made the right call letting Paul Kersey go.  In short, make McClane what he is; the result of decades of violent change on and off screen.

This can’t be a bigger better faster more kind of movie. It also can’t be a story McClane wins. If the rumours of a framing device in the present day are true, then the 1970s scenes have to be small scale, intimate and nihilistic. It has to be a case John survives, not solves because that’s the only way the stakes have meaning and the only way the story will work. Otherwise, it’ll become what so many people are expecting; a pointless entry in a series long past it’s sell by date. And if there’s one thing John McClane has always done, its buck expectations.

Here’s hoping he can do it one more time.

(Die Hard:Year One is also the title of two comic series scripted by Howard Chaykin. Here’s the comixology link.)