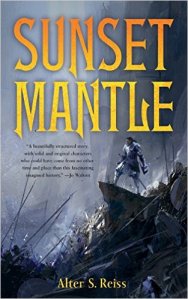 A couple of days ago I ran a review of the third entry in Tor’s excellent new novella line, Sunset Mantle. I talked to the author, Alter S.Reiss about inspirations for the book, the romance at its heart and how he planned the final battle.

Tell me a little about the inspiration for the world.

The place the story really started was when I happened to be watching a couple of people talk.  One was a taller, wild-haired hippie sort of guy who looked like he’d spent most of his life out of doors, and the other was more polished, clean-shaven and in a nice suit.  But they were clearly closely related–maybe brothers, maybe cousins–and there was a clear bond of affection between the two.  It was a bit like the “country mouse and city mouse” sort of thing, but it wasn’t that one was teaching the other about life in unfamiliar surroundings; they were just close despite their differences.  It took a lot of thought to go from that to the relationship between the Antach and his brother, and the worldbuilding that was required to make that relationship make sense, but that’s where it started.

In broader terms, there were things that I wanted to explore, in terms of religious people, and in terms of economics and so on.  It took a while for all the pieces to fall into place, and there are still plenty of things that I haven’t worked out in any great depth, but the binding force was that I wanted the relationship that I had imagined after watching those people talk.

You take great care to make sure that we’re aware there are places outside the Reach. Have you written in this world before? Do you have plans to do so again?

Aside from a few false starts, this is the first story that I’ve written in this world, and while I’m working on a few ideas for others, I’m nowhere near ready to start work on any of them.

One of the things I loved about the novella was Cete’s awareness of the different battlefields he was perpetually on. What sort of research led to Cete? Was he inspired by anyone in particular?

Actually, the place where Cete started as a character was an archaic spelling for a badger-hole (the current version is sett, which is occasionally useful in scrabble.)  Which isn’t to say that he’s a badger-man or anything like that, but there’s a sort of stubbornness and temper and attachment to where he is that comes from that.

The romance at the heart of the novella is wonderful. There’s a pragmatic sweetness to it that’s incredibly poignant and I was curious how that evolved over the writing of the novella?

This is one of those things that comes from wherever it is that stories come from; there are lots of details that changed, but the romance is more or less is the thing I came up with when I outlined the story.  It’s a relationship between two adults–or at least, two imaginary people, who I imagined as adults–who both have their own life history behind them, their own concerns, a well-established sense of who they are, and a practical way of going about things.  I was interesting in something different that the all-consuming, dramatic sort of romance that you often see with younger characters, hopefully without losing any of the depth of emotion.

The final battle is geographically complex and you lay everything out with absolute ease. How mapped out was it before you began writing?

I think this may be one of the things that I picked up from doing archaeological fieldwork, though recently I haven’t done as much of that as I used to.  I haven’t sat down and drawn up a map of the final battle, but being able to have a clear mental map is really useful both in archaeology and fantasy writing.

Thanks, Alter, for taking the time to chat to me. Sunset Mantle is excellent, out now and available here and from Amazon US.