Marc Jackson makes some of my favorite comics. The writer, artist and publisher is a relentlessly positive force on the UK indie scene, running comic workshops and churning out a long string of sweet, funny titles of his own.

This Friday he adds yet another string to his bow with KA-PUNCH! Here’s Marc to describe it;

“My new comic strip ‘KA-PUNCH!’ starts in this month’s issue of Comic Heroes magazine. The first appearance is two full pages and the following issues (they have committed to 2 more issues so far) will be single pages. The story is self-contained for each issue, as they come out quarterly, but will also continue on strip to strip, in a roundabout fashion. It’s a goofy new super-hero comic about a young fella called Wally Waffle, who is given 3 wishes from the mysterious Gene the Space genie, turning himself into the cosmic powered crime-fighter ‘KA-PUNCH!’ amongst 2 other random choices! I pitched it to the editor Will Salmon a few months back, as a cross between Adam West’s Batman and Adventure Time and he loved the sound of it. The rest, is funny book history!”

So, this Friday go and pick up the new issue of Comic Heroes. Not only do they have some of the best comic journalists in the country on staff but now? Now they have KA-PUNCH! 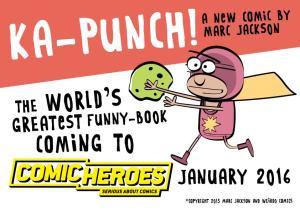