A lot’s been written about Finn and Rey’s unusual competence with a weapon they’ve barely used before. Yesterday we talked about why that competency makes sense for Finn. Today it’s Rey’s turn. 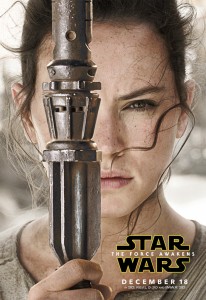 Rey’s shown early on to be a gifted brawler. She’s unusually attached to her staff and swings it with the sort of enthusiastic success that someone who’s taught themselves how to fight tends to have. What she does isn’t pretty or even especially formal like the moves we see Finn use but that’s the point. Finn’s a good fighter because he’s trained to be. Rey’s a good fighter because she’s had to be.

That’s her foundation and it, along with how terrified she clearly is, informs everything she does. Look at the first half of her duel with Ren again. She spends most of it treating the lightsaber like a staff and trying to keep Ren at the end of it. She’s fighting entirely defensively and it’s not going very well. Like in the previous fight, Ren’s all over her and, again, the only thing keeping her alive is that he’s already badly injured.

In short order, Rey is off balance, powerless and in serious danger. The fight ends, there and then, if it wasn’t for the fact that Ren is so desperate to emulate his grandfather. This, he decides is his Cloud City moment. He will take an apprentice even though he’s not even finished his own training. Because that will make him whole in the exact same way betraying his family, murdering his father and dedicating his life to finding and killing his Uncle hasn’t.

But Vader commanded. Ren pleads. And, in doing so, gives Rey time to find her focus and push back against him.

There are so many layers of irony wrapped up in this moment it’s almost impossible to untangle. Rey, as we see throughout the movie, is always learning from Ren. Everything he isn’t, she is. And everything Rey embodies is perfectly designed to beat him. One is closed off, the other is open and where Ren props himself up through training and an image he will murder to aspire to, Rey trusts herself. That’s why she wins. That’s why her moves in the second half of the fight are so instinctive. She, like Luke before her, trusts her feelings. And, like Luke before her, that’s all she ever needs to do. Or to put it another way, Ren listens for the Force. Rey hears it.

Everything interesting about the new trilogy is encoded into these two scrappy, desperate fights. There’s no moral certainty, no clear lines. Just three young people born in the ruins of their parents’ world trying to enforce their will on it and each other. So far, it’s a draw. But in 2017 I think we’re looking at one hell of a rematch.