Den Patrick’s The Boy with the Porcelain Blade is one of those beautiful fantasy conceits that grab you inside the first few pages. The story of an Orfano, a mutated child courted and reviled in equal proportion by the noble houses of his home, it’s a swashbuckler with a black heart and tricks up both sleeves. The sequels have expanded the world out into a complex, nasty fantasy with one hand on it’s sword hilt and one eye on the exit. I talked to Den about the final book, The Girl on the Liar’s Throne, the series as a whole and how it’s changed.

Tell us a little about the book.

The Girl on the Liar’s Throne is the final part of The Erebus Sequence, following The Boy with the Porcelain Blade and The Boy Who Wept Blood. Each of the novels has a different protagonist, and The Girl on the Liar’s Throne has two, Anea Oscuro Diaspora, the former leader of Landfall, and her mysterious  imposter. Anea starts the novel robbed not just of her throne, but of her memories. She has to piece her life back together and find a way to set things right before the insidious Erebus provokes a war.

How’s your approach changed? Do you find yourself writing differently than you did back with Porcelain Blade?

The Boy with the Porcelain was an experiment of sorts to see if I could write a novel with alternating flashback chapters, much like Iain M Bank’s Use of Weapons. The Boy Who Wept Blood is a far more straight forward novel and doesn’t require quite as much mental acrobatics on behalf of the reader. With The Girl on the Liar’s Throne I was very taken with a screenwriting book called Save the Cat. I structured each of the protagonists stories around the story ‘beats’ that Blake Snyder mentions in his book. My approach didn’t so much change as become more formalised over the course of the trilogy. 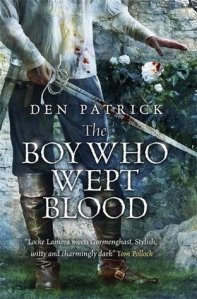 One of the things I love about this series is the way you swap out protagonists. How does that influence your writing style?

I think the narrative voice of the trilogy stays consistent throughout the three books. Lucien, Dino and Anea have a lot in common and have had the same education, so it stands to reason they see the world through similar eyes. I really wanted the reader to feel the difference in the dialogue, so that’s what I focused on. It’s fun to give characters conversational tics, or perform a type of body language when they are thinking or distressed.

All of the characters are outsiders to an extent and that makes them watchful and observant. That chimed with my desire to bring the world to life with vivid descriptions. It’s probably the cinema fan in me (and the comics fan, and the concept art fan).

How does it change the focus of the book?

I’m not sure I can really put it into words. I carry the characters in my head when I’m writing and that likely has a subconscious effect on my word choices, or how blunt the sentences are. Lucien is angry and brooding, where as Dino is much more measured and dutiful. Anea is slightly cold, but funny, and very vengeful. So vengeful in fact I had to tone down the end of the book. She wasn’t an entirely sympathetic character by the end of the series, and it required something of a re-write. 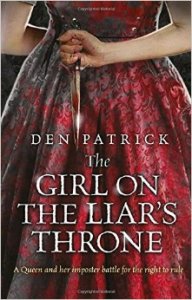 Is Liar’s Throne the book you thought it would be when you started the series?

I knew that each book would have a different protagonist from the start, much like Joe Abercrombie’s books after The First Law trilogy. What I didn’t know back then was that The Girl on the Liar’s Throne would not only feature a second protagonist, but also have a B-plot featuring two scouts. I’m very fond of Datini and Corvino.

I had hoped that each of the books would work as a stand alone novel, but so many things in The Boy Who Wept Blood needed addressing that it very much links into The Girl on the Liar’s Throne.

What’s next? Is this the end of the Sequence or do you have more planned?

It’s the end for now. There might be the odd short story or novella that comes along, but currently I’m working on a new top secret project, as well as juggling the day job and finding time to have fun.

I can’t quite believe that I have three novels out. So much time and hard work has gone into them. I have to do a double take when I see them lying around the flat (amid all the other books). I’m sticking with Fantasy for the moment, but I’m keen to try my hand at a science fiction novel too.

Thanks Den for chatting with me. The Girl on the Liar’s Throne is out now, as are the two previous books in the sequence. In addition, a short story set between books 1 and 2 is available for free from Podcastle.