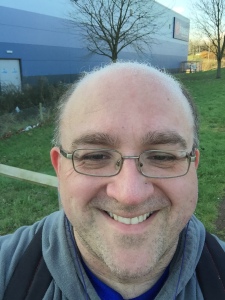 Runface! One of the things I love about living in Milton Keynes is that it’s not quite but very nearly impossible to have to cross a road in the middle section. That makes getting up to speed and staying there easier. Or at least less hard. So this is me round the back of one part of the home goods retail park not eating a panini in the building behind me. Just thinking about it.

So! Fitness check in!

-I missed a day this week. Couple in fact. This was partially stress and partially low level ill. I caught up to being just one in the hole thanks to a couple of days of Superhero Workout made the call to not kill myself to clear my decks and reset the clock. I’m pleasantly surprised by how much I’m not kicking my ass about that. Ill is ill, stressed is stressed. The secret is not to push through them but to keep going around them.

–Superhero Workout four times this week. Two sessions at once on one day to catch up. This was hard but it wasn’t that hard and I’m quite pleased about that.

–DDP Yoga Nothing and boy did I pay for it after the run. I spent two days with the middle of my right calf basically calling me names every time I sat down wrong. Stretchy time this coming week, for sure.

–Zombies Run Couch to 5k had another good, but tough, week. I had to do 5 30 second intervals. I did 7 35 second ones. Plus, one of those MAY have been longer because I’d forgotten something really fun they do.

The episode I listened to had Sam, the usual com tech, come out for the training run with me. You do everything as normal but Sam’s acting more and more squirrelly. Finally he runs off and you and the Doc, who’s running comms this episode, figure out he’s taken you past the spot where the last Runner 5 died.

A quick sidenote; Runner 5 is your designation in Zombies!Run. You’re not the first.

And the last Runner 5 and Sam were involved.

So he goes off book to try and find her wallet, which wasn’t found on her body. You’re told to run after him and…welll…I’m pretty sure the interval gets thrown out of the window. It was certainly longer than 30 seconds, or felt that way. Nicely done, and a fun way to mess with your expectations.

Speaking of expectations, the Body Image Goblin expects you not to bother. Ignore him, I am. And I’ll see you next week.