Over Christmas, I conducted baking science. Specifically, Tiffin baking science based loosely on this recipe. Tiffin is brilliant. Picture big lumps of dry wall but the dry wall is chocolate and the insulation is raisins, biscuits and joy.

Also you get to play with ALL OF THIS! VICTOR! The suspects! 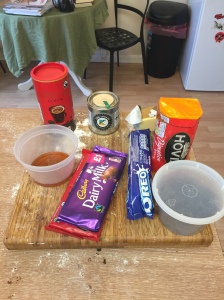 -Golden syrup (Actually in the plastic tub on the left. I left the can there because it’s pretty.

And disappointingly no echo. Now, you’re probably looking at all that and thinking it’s a lot of sugar in a wide variety of suspensions. To use all of that is madness!

Anyway, here’s the thing. Those aren’t so much ingredients as they are a set of guidelines. You will be using all of them but how much of them you use is entirely up to you. Which means if you are worried about punching yourself in the face with that many calories you can mitigate the impact a little bit. Plus I bake it in individual cups as opposed to the mighty shield of lumpy deliciousness a traybake Tiffin is. So, your mileage, ingredients and sugar rush will all vary.

So here’s what I did;

-A third of a cup of Golden Syrup

-Half the two bars of chocolate (Plus several samples for…science. Yeah. Science.)

-The entire pack of Oreos.

-Half the pack of Hovis

-A third of a cup of raisins.

Here is what I did with them:

First off, boil some water and place a glass bowl over the top of the boiling water. Once you’ve done that, add the butter, syrup and broken up chocolate to it. Also if you want to be really fancy or the contact high from the melting sugar products is so immense you can actually smell colours? Add some chocolate chips too. Stir until it’s all melted then turn the heat down. 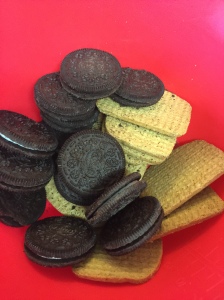 Next, murder some biscuits. Seriously, drop them in a bowl, get a rolling pin or something else that you could conceivably use in a non-stabby kitchen based fight scene and pound them. Like everything else with this, you’re in control. I broke them up a fair bit, I know some people who basically render unto Caesar the crumbs that are Caesars. Get down with your bad self, however you want to.

Then the part so easy I didn’t actually take a photo of it; mix the melted goo storm you have on the hob with the broken biscuits. Stir it round so everything’s nice and covered and then dole it out. Tray bake’s work well, but I’d recommend a high sided dish to pack it down into.

I went for these little chaps.

A decent tablespoon and a bit of the mixture at the level I went for makes about a dozen of these. They’re not pretty by any stretch of the imagination but they are delicious and, from this exact point, require no further prep. Seriously put them in the fridge and 12 hours or so later they’re solid and good to go.

What’s It Good With?