Fitness Week 10: The Other Side of the Lozenge 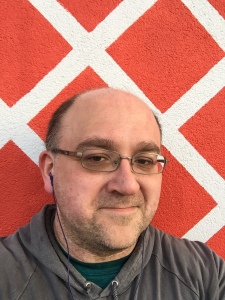 RUNFACE! This time I went out past the end of the Mall at the top of town. MK is laid out really weirdly, with that mall at the top of a lozenge of urban growth that has the train station at the other end. I know what’s out past the train station (A 24 hour Starbucks which is so like the ones in California I sometimes go there and convince myself if I leave at the right angle, a Jamba Juice will magically appear) but had no idea what was out past the mall. Now, I do! The good news is the world does actually exist out there. I was mildly worried about it being like the Langoliers or something.

The better news is that I found the art gallery! And a MASSIVE piece of ridiculous pseudo architecture in the park up there as well as, maybe, a lake. So the background of these photos will be varied for a little while yet.

Anyway! What did I get up to this week?

–Superhero Workout Again, nothing this week. My feet’s still a little banged up and I’ve been getting more out of the flexibility that DDP Yoga gives me so another week on the bench for this. I’ll come back to it though.

–DDP Yoga Four Diamond Dozens this week, two on one day. My flexibility is really improving too. I remember when I first started doing yoga about four years ago I was horribly aware of how stiff I was. I’m now at the point where I’m almost able to fold forward with my legs straight. I’m very pleased with this plus the resistance is great for strength training.

–Zombies Run Couch to 5k Four intervals of 55 seconds. One interval of 65 seconds.

Yes I did this.

This is the first big barrier down. I’ve run longer than 60 seconds twice now, and six weeks ago that was like running to the Moon. Now I’ve got to decide whether I want to raise my interval increases to 10 seconds and when I try and string those intervals together.

Because right now the app is telling me to run for 30 seconds and walk for a minute and I’m doing the exact opposite.

That’s a good problem to have even the Body Image Goblin could see that. Next week he’ll see me do it, and more, again too.