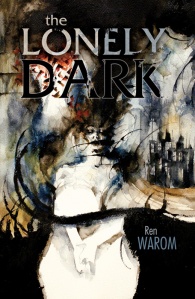 ‘Per ardua ad astra’ translates as ‘through hardship to the stars’. It’s the motto of numerous air forces across the world for obvious reasons. The pioneer spirit that drives and romanticizes aviation and spaceflight is wrapped up in those four words as tightly as it is in four others; ‘Space, the final frontier…’ Both those phrases are also at the center of The Lonely Dark by Ren Warom. But instead of hardship, Ren and her characters find something both more alien and far more personal.

The story follows Ingmar and Yuri, two Cerenauts carrying the weight of two worlds on their minds. The AI powered deep space programme has been a catastrophe and Danai, an AI responsible for the defining atrocity, has a close personal connection to Ingmar. Unable to cope, Danai went mad, but, as they prepare for departure he sends his not-quite sister a warning; stay away from the lonely dark…

Ren deals with three plots here, using the small focus of the book to study each intensely. The first is Ingmar’s past and how it relates to Danai, the Cerenaut program and the future. This is the book’s emotional core and it’s also where Ren cuts loose. Ingmar’s abilities and past are both defined by trauma, both real and perceived. She’s highly gifted, endlessly compassionate and completely opene even after everything in her life has tried to close her off. Crucially, she’s never fragile either. Ingmar is a woman with a unique viewpoint, a survivor who cherishes not her scars but the places they used to be and she’s no one’s victim.

The second plot is the largest in scale, with Ren exploring the consequences and origin of the Cerenaut program. It’s a great idea; astronauts sustained through VR set ups drawn from their own memories and cleverly places Ingmar and Yuri in a very different kind of void to the one they’re travelling through. They’re no longer fully human but aren’t quite digital, becoming guards standing watch through a very long night as their charges sleep. It’s huge in scope and intimate in execution, the quiet bravery the two need mixed with their ability, and deep-rooted need, to be separate from humanity. It’s also quietly the sweetest, most intimate platonic friendship I’ve read for a very long time. Ingmar and Yuri are loners by definition but they revel in the knowledge that they’re not alone in that.

That brings us to the final plot, and the master stroke; what’s waiting for them and how it’s defined by their presence. Ren uses the life experience of and connection between the Cerenauts to define the undefinable. That in turn leads the book on a tonal shift from character study into science fiction, horror and out the other side into the rarefied territory that few stories of this type manage; where consequence and character are used as both map and prison. By the end of the book, Ingmar, Yuri and the reader all understand why Danai went mad. Better, or perhaps worse still, they sympathise.

There are no villains in The Lonely Dark, no clearly defined and simplistic struggle. Instead there are two brave, odd, solitary people acting as the sword tip of humanity. They run headlong into hardship, they encounter the stars. But what they find waiting there will haunt them, and you, for a long time. A chilling story with huge scope this is a must for science fiction fans, horror fans or anyone wanting to see a brilliant writer hit everything they aim at.

The Lonely Dark is available now in print and digital editions