Two quick points before we start. First off, Amanda Conner and Jimmy Palmiotti are two of that rare breed of comic creators whose work is always, without exception, worth reading. For years now the pair have been turning in top flight, endlessly varied creator owned material and some of the best work for hire comics on the planet. They don’t get huge amounts of acclaim, because people who are consistently very good at their jobs don’t tend to, but it’s deserved and long overdue.

Secondly, this is the first collection of a book that ends today. For a lot of readers, that’s a kiss of death which is a shame as it’s almost never true. I’ve worked in comics, as a retailer, journalist and writer for over a decade and in that time one of the biggest lessons I’ve learned is the validity of individual interpretations. A creative team’s run on a book, especially if they’re given a chance to wrap it up, is no less valid than an ongoing series. In fact, it’s arguably more valid, the individuality of vision giving the story an urgency and measure that a lot of ‘eternal’ books desperately need and frequently lack.

That’s what’s happened here, it’s great and you should buy it. Here’s why.

Kori, aka Starfire, is one of the most powerful characters in the DCU. Weirdly she’s also often been written as either a mindless bimbo, a child or a piece of sentient cheesecake with occasional dialogue. Conner and Palmiotti cut through all this, take the basic elements of her character and completely rebuild her. In doing so, they simultaneously improve everything about her and keep absolute faith with the core concepts of the character. 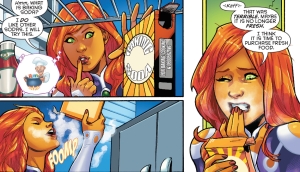 Their take on Kori has almost no filter. She’s an endlessly friendly, emotionally open young woman who can fly, is nearly invulnerable, has precisely no concept of metaphor or nuance and not much more of personal space. She’s incredibly, relentlessly sweet but that sweetness is tied in to a genuine innocence that’s fundamental to the character. She’s still a 6 foot plus, orange skinned powerhouse but she has agency not artifice. She’s not an idiot, a child, a bimbo or a slut. She’s an alien and everything from her lack of filter to her cheerful willingness to use her powers speaks to that. It’s a tiny, subtle shift but it’s a revolutionary one.

That’s reflected throughout the rest of the script too. This first volume sees her fight a bounty hunter from her home world, help another local superhuman and assist in disaster relief after a hurricane hits her new Florida home. She approaches each one with the same absolute dedication and compassion and that leads to moments of surprisingly visceral emotional impact. When the local sheriff mentions her grandmother has passed away, Kori tears up. It’s another moment of complete honesty and it takes Stella, the wonderfully grumpy local sheriff, out at the knees. Handled differently, a scene featuring two female leads brought to tears over a recent bereavement would feel crack handed. Here it’s gentle, compassionate and real. Likewise the later moment where Kori gets a job at the local aquarium by talking to one of their dolphins about why she’s sad. From other characters it would play as deeply odd. From Kori, especially in the hands of a team this great, it’s just who she is.

That level of intelligence is present throughout. Conner and Palmiotti love titling individual scenes and that gives the book a rapid fire delivery that feels like a well-paced sitcom. There’s a sense of scale to every event and the format lets them shift gear from comedy to pathos without breaking stride. Likewise Emanuela Lupachino and Micro Pierfederici on pencils successfully communicate that subtle shift to Kori I mentioned earlier. She’s still an intensely glamorous character but they have an understanding of her physicality that previous artists have almost always lacked. This Kori is still a bombshell, in every sense of the word, but she’s also a bright, cheerful young woman with a sense of humor that’s far more wry than it first seems.

The inks by Ray McCarthy and Trevor Scott help immensely too, giving the series a fluid but detaild look while Hi-Fi’s colors give it the lush, sun drenched look that Florida needs. The art team also excel at the pictograms showing Kori’s literal interpretations of Earth slang, frequently the best gags in any given issue. Finally, Tom Napolitano’s letters give the entire cast unique timbres too their voices that help ground the whole book.

So, this is a series that won’t be returning after issue 12 and that’s a crying shame because I’d argue Starfire has never been better written. However, we do get 12 issues of one of the kindest people in the DCU trying to understand Florida, written and drawn by some truly A-list talent. I’d have loved to see more, but I’m so glad we got what we did.

Thanks as ever to Travelling Man for the review copy