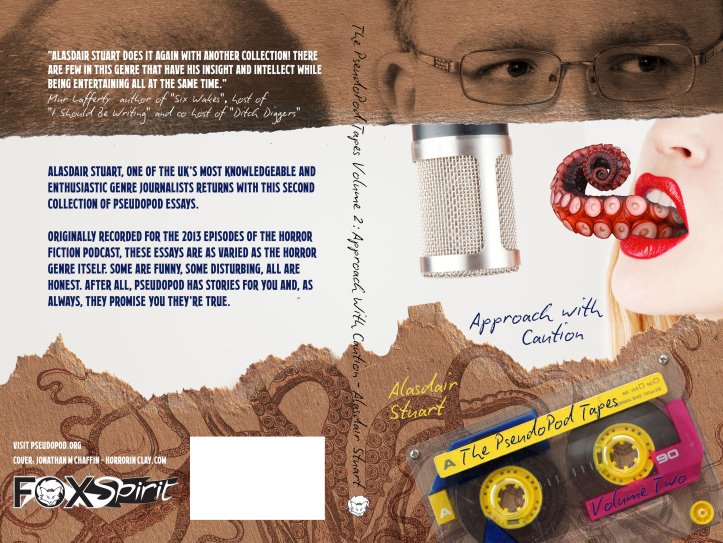 For those of you who don’t know, PseudoPod is the horror fiction podcast I’ve hosted (Oh DEAR GOD) just over a decade now. It’s one quarter of the Escape Artists flotilla of podcasts which also take in YA (Cast of Wonders), Fantasy (PodCastle) and Science Fiction (Escape Pod). Just under 2000 episodes! Maybe more by now! Four shows! All free! All donation powered! No there are days when we aren’t sure how that can possibly work either!

My outros on PseudoPod have become a big part of the show’s success and The PseudoPod Tapes books collect and revise them from each year. Volume 2 is 2013 and was funded as part of our Kickstarter just over a year ago. The galley is in final edits now, the cover is up top and soon, SOON, this book that has been in my head for a long time will finally be out in the world.

2013 was a crappy year for me professionally, and I processed a lot of that through these outros. There’s some of the darkest stuff I’ve written in this book and also a lot of the foundation for my worldview now. I learned to stand up more than I had in 2013 and that’s a lesson that’s still helping me out today.

Also I am, it turns out, a fundamentally hopeful guy and, working in the horror field, that makes me, well…slightly odd. That’s reflected here in a run of essays that takes in everything from the fictional architecture of London law enforcement fiction to the first (I think) of our legendary Halloween Parades.

I love my job, and I love this book and I’m so excited and relieved and mildly frightened to see it finally come to fruition. Massive thanks to everyone at Fox Spirit, the mighty Jonathan Chaffin for the cover and the backers for giving us a chance to make it happen.

And I swear the next one won’t take four years.

(This piece originally appeared in my newsletter, The Full Lid. Check out the archive over here, and subscribe for a weekly dose of pop culture, enthusiasm and my work)