BOOK REVIEW: Windswept and Like A Boss by Adam Rakunas

Angry Robot are one of those publishers, like Fox Spirit, who are adept at turning out endlessly varied, diverse and interesting work. Two of their very best are by the same author; Adam Rakunas.

Windswept and Like A Boss both follow Padma Mehta, a former corporate specialist turned (slightly) amiable commune organizer. Padma lives on a world populated by dropouts, men and women who’ve jumped ship to escape lifelong contracts. It’s a hard life, but it’s a hard life that everyone pushes through together and Padma is happier than she ever was in her old life.

Aside from the nightmares. Padma’s cryo chamber malfunctioned on the trip out which means she didn’t dream. For years. Unable to sleep without a specific ritual every night, Padma works to hold her community together, even as the corporation decides to push back…

Windswept explores the world Padma lives on with a wry, mildly sleep deprived view that’s equal parts sweet and horrifying. The callous way she and her crews are treated is neatly contrasted by the cheerfully ramshackle community she’s part of. Best of all though is Padma herself; endlessly grumpy, endlessly principled. Endlessly in trouble.

Windswept brings all this into land with a massive scale, quietly punky finale that puts Padma in the best position through the worst possible choice of action. That combination lies at the heart of Like A Boss too, where Padma, newly retired, discovers that being in charge is…not fun. At all. As a strike rips through the planet, she begins to realize that she may be the only person who can find out what’s really going on. And worse, the person behind the strike knows it… 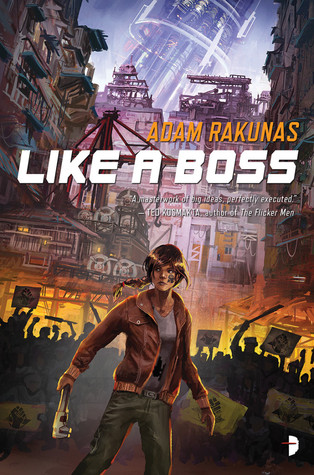 Rakunas writes with a good natured, dirty fingernailed sensibility that makes these books a delight. The books present a little like a bloody nosed Northern Exposure in space. They’re very funny, very grounded and the moments that horrify you will genuinely horrify you. Better still, the payoffs all feel hard won, earned and realistic.

The original plan was for four books but at present only two have seen print. I’d love to see this series finished, and for it find the audience it deserves. And for Padma to maybe, just once, catch a break.