April TTRPG Challenge Day 14: What Are Yer Dreams and Plans?

I’ve written for Doctor Who, Primeval and Star Trek. If you wanted to go purely off IP franchises? All I need is to write for Star Wars and my inner 12 year old will never stop jumping up and down on the bed.

But honestly, it’s not just about that anymore. Work for hire is great, because you get to play in someone else’s sandbox, one that has probably meant a lot to you over the years. I don’t see myself leaving that any time soon. But. this? This is more FUN. 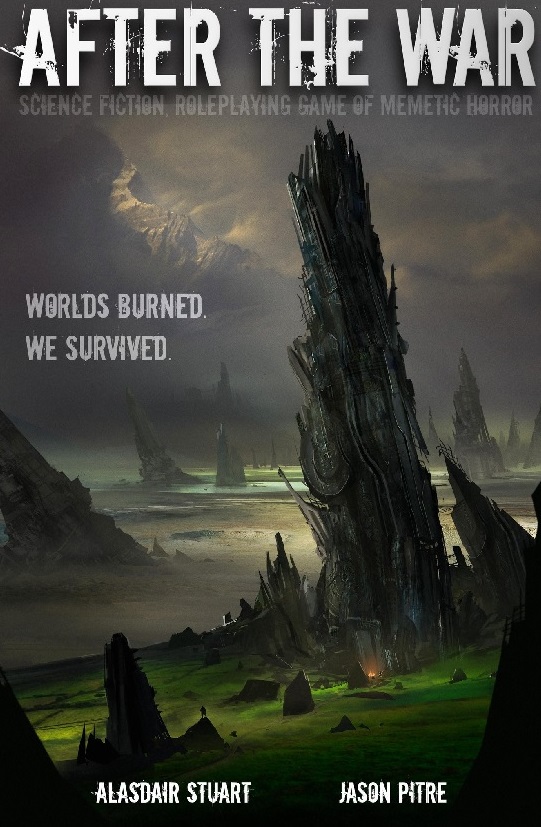 After The War is the weirdest RPG work I’ve ever done, and I once wrote a module which involved a thinly veiled version of Shawn Michaels hunting a prehistoric dino-whale from a secret base in the Maunsell Forts. Working with Jason has given me the ability to get past the one thing I know, viscerally, has got in the way of a lot of my work; fear.

It’s easy, especially when you’re working to a brief, to self censor. The two plus years we’ve put into ATW has taught me that that is the worst thing you can do. Listen to your instincts, follow them and then tune them. Get everything on the page first, then prune back until you’ve got what needs to be there. It is always much easier to do that than to spread out into areas you’ve decided you don’t want to write about beforehand.

Case in point; there’s a viewpoint character in some of the ATW source material. She’s an anthropologist working for one of the human groups that escaped the war largely unscathed. Dropped on Polvo, the last colony to be something approaching intact, her job is to brief new employees on the various race they’ll encounter. It’s fun stuff, source material written from an in-universe POV which is always a blast.

It’s also completely honest. She’s not okay. Because in the ATW universe, absolutely no one is okay. She channels her grief and horror at what she saw into her work and the humorous approach she takes to it and that in turn makes her pop as a character and makes the source material much more fun. Plus the meta narrative of her starting to misbehave inside the guidelines she’s been given becomes a vital part of the background.

I would never have done something like this five years ago. And my work would absolutely have suffered for it. Now I’m doing the best work I’ve ever done, largely unfettered by the fear that has in the past held me back.

So, dreams and plans? Much more of that, please.

Here’s my published work so far. If you want to talk to me about a project you’re hiring for, get in touch. Alternately, come say hi on Twitter and I’ll see you back here tomorrow.