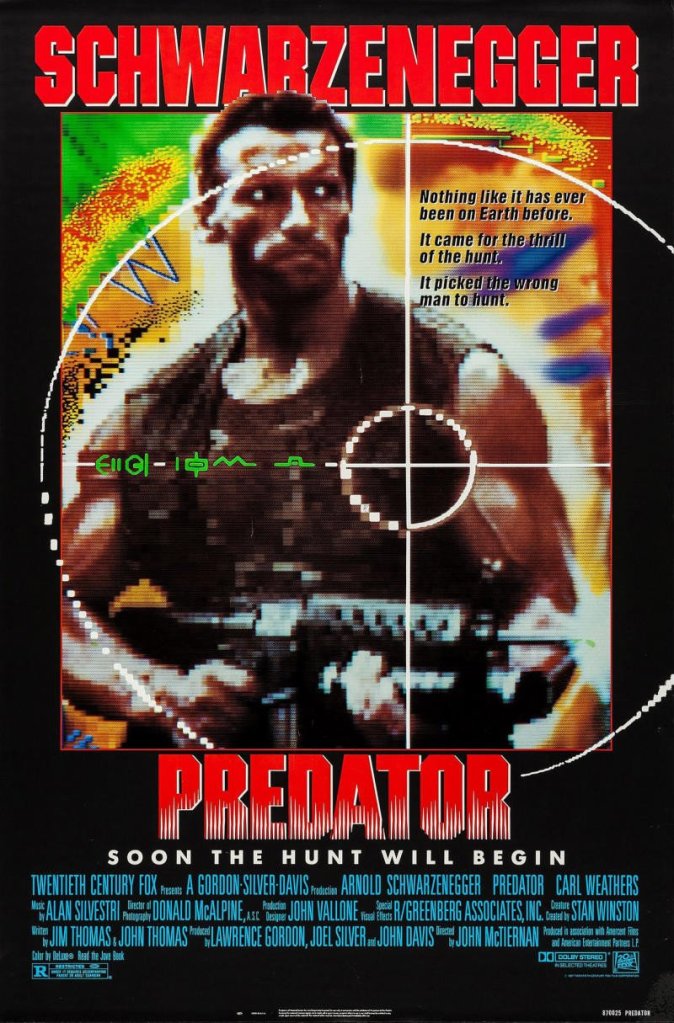 Shortly, Shane Black will have vengeance that has been decades coming. Black, who is the writer and director of the essential Kiss Kiss, Bang Bang and The Nice Guys among many others was an actor before he was a director. His most prominent role was as company communications tech Hawkins, in Predator. He’s the only character who isn’t a walking bicep, smart, driven, wired and of course the first to die. I‘m writing this on the 3rd of September, 9 days off the arrival of The Predator, the Black written and directed sequel to the original movie where he was killed. Meta-fictional victories are the best. So, in the run up to it, let’s take a look at the movies that proceeded it.

Full disclosure; I don’t like Arnold Schwarzenegger. He’s boring, an Austrian slab of beef who’s first career phase was based on his tectonic scale and whose second was based on him laughing at how big he used to be. Don’t get me wrong there are Arnie movies I enjoy, a lot, but for me it’s always the people around him, not him. I like action movies where jeopardy is at least possible. That’s almost never the case with him. So I remember Predator being a flex fest wherein a bunch of muscled commandos are fed to a space hunter, lose progressive amounts of their clothing, find some baby oil and then Arnie outruns a mushroom cloud and the franchise gets much more interesting. That’s exactly what I was braced for.

This, my friends, is one of those times where I really enjoy being wrong. 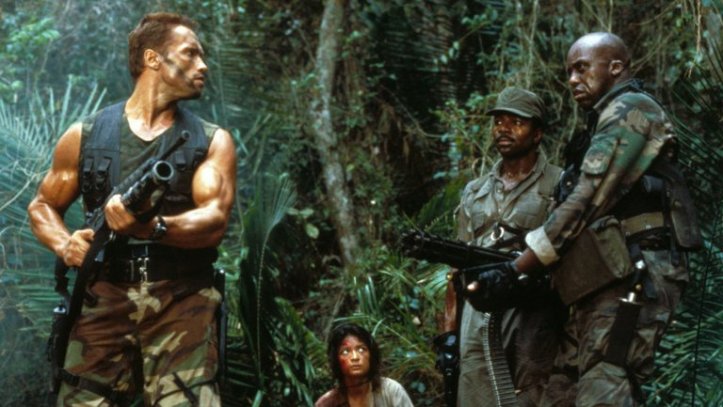 The mushroom cloud thing happens. The progressive statistical increase in chesticle per square inch happens. The muscled commandos definitely happen. There are even a couple of just galactically shitty Arnie one liners, delivered in the middle of an action sequence where someone is exploded into the air in slow motion literally every five seconds. Elements of this film have aged hilariously badly.
Or would have if the rest hadn’t snapped into sharp relief. The key to Predator is not
Schwarzenegger or his surprisingly engaging fire team including Bill Duke, Sonny Landham and a hilariously baby-faced Shane Black. It’s in the environment they’re dropped into and how laughably outgunned they are throughout.

This isn’t a Vietnam movie, but it might as well be. A force of American soldiers are stalked by an antagonist who is far more at home in the jungle than they are while they struggle to carry out a morally ambiguous mission with an unclear end date. I mean, it’s not quite Robert McNamara briefing them at the start (or perhaps Colonel Sam Trautman) but it gets pretty damn close.

Much like the Philip Kaufman remake of Invasion of the Bodysnatchers, this is a movie perched on the transition between two time periods. On one side is the Vietnam war and the immediate after effects of it. On the other is the ‘80s, ‘90s and the increasing dominance of moral ambiguity in both foreign policy and action cinema that sprung, ironically, from both the Vietnam war and stories about it. It’s not the first time movies like this broke that ground, after all the original Rambo is directly concerned with a PTSD suffering Vietnam vet, but it’s the first time genre action cinema addressed it and did so in a way that’s far subtler than it seemed at the time.

That war is a specter that hangs over both the movie and these men’s lives, most notably the friendships between Mac and Blaine and Dutch and Dillon. The first two men never really came home; so convinced that they were untouchable after surviving the war that they threw themselves back into their violent work. The second two embodied that divide I mentioned; Dutch explicitly says he only does rescue work. Dillon, who he served with, feeds him into a situation that’s both anything but that and has no clear end date just to see what happens. The morality, or illusion of morality, of the Good Soldier, is abandoned in the interest of the Company. As a result, no one really comes home.

In fact it’s arguable that the best thing this franchise ever did was leave Dutch on the shelf. Not because he’s played by Schwarzenegger but because any appearance after his last one here cheapens the surprising emotional arc of the movie. Dutch, beaten half to death, charred, traumatized, staring blankly into space as he gets to be the only man standing is powerful. Dutch presumably being whisked away to be debriefed, recruited by MONARCH, killed and dropped in the ocean or quietly retired is even more powerful. So powerful in fact you you almost forget the fact he outran a MUSHROOM CLOUD.

Predator is not high art but high art or the lack thereof is not an arbiter of quality. What it is, definitively, is a great start. Of all the classic monster franchises of the latter 20th century, only Predator and Alien stand out as good films that finished with room to grow and explore the premise even further. The pair of them ending up in the ring together was inevitable and as we’ll see, had mixed results. But for now, as a singular movie, Predator stands out not just as a genuine success but as something far more interesting than I remembered. A gristly, spinal column filled pleasant surprise.