It’s a weird time in western comics. We’re into the triumphant third year, at least, of ‘the superhero movie bubble is about to burst!’ And the far right harassment campaigns that have wandered between pop culture media for years looking to start fights have decided that comics is their next hill to die on. Then there’s the fact that Marvel’s current editor in chief used an Asian pen name to get work, doesn’t think work has to be political and…well…it’s a pretty depressing place to visit sometimes let alone make a living in.

Not on Bobby Drake’s watch though. One of the original X-Men, Bobby’s solo title was cancelled and instantly became a whipping boy for the ‘diversity doesn’t work!’ Crowd. It then picked up impressive sales in collected form and returned which is about as perfect a meta narrative for a superhero book as you can get.

So, issue 1 again, don’t call it a comeback. But do call it fun because this is the exact sort of book that marvel excel at right now even if at the editorial level they often seem like they don’t want to. 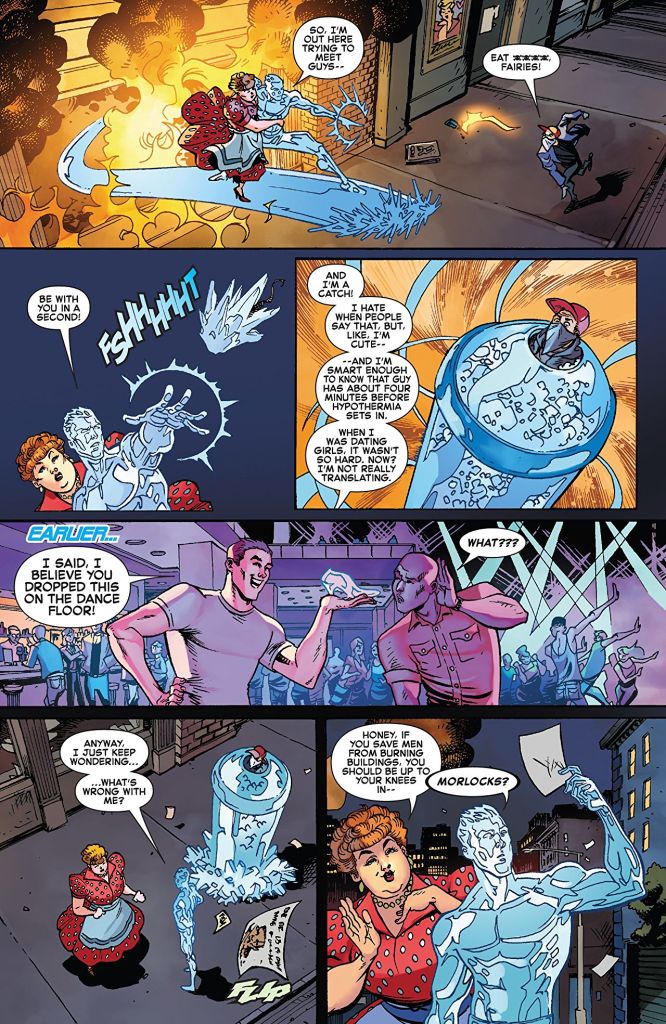 Sina Grace’s script is rapid fire, fast moving, funny as Hell and deceptively nuanced. Opening with Bobby striking out on a night out (And, as you see, a lovely gag involving an ice slipper) it settles into the mind and voice of the frozen motor mouth instantly. Bobby’s a sweet guy; kind, funny, smart, good looking and…very much single. He’s only recently come out, only recently broken up with his boyfriend and is still finding his way around, well, everything. Bobby is cheerfully frustrated by a lot of his life. He processes that through humor and Grace’s first genius move is pairing Bobby’s frustration with a case that teams him with Bishop.  Bobby is small, fast and hyper articulate. Bishop is large, methodical and speaks when he needs to. They really do fight crime. It’s a double act that instantly works and I hope sticks around, especially as it leads to a long overdue return to the Morlocks.

The mutants who live in New York’s sewers, the Morlocks are the forgotten poster children for the X-Men’s central metaphor of discrimination and it makes perfect sense for Bobby and Bishop to be the ones who re-open diplomatic relations. This is Grace’s second genius move; a missing persons case that leads the two groups together and resonates with the hatred and discrimination they all face in subtly different ways. That, in turn, ties into the overall ethos of the X-side of the Marvel universe and in doing so sets up an overall arc with the offhanded grace that Bobby uses to throw his ice golems around

But comics are a team sport and this team all brought their A game. Nathan Stockman’s art has a burly energy to it that gives the action scenes a lot of energy but makes the jokes absolutely sing. There are a couple of moments here where Bobby throws a joke out and its just brutally no sold by the other characters that are flat out hilarious. That’s down to Stockman, Grace and their willingness to use silence. Federico Blee’s color work also impresses, especially in the ease with which it establishes visual identities for the school, the sewers and the street, VC’s Joe Sabino’s lettering rounds everything up, hitting every style of dialogue with the same ease and making sure everyone has their own voice.

Iceman’s second lease of life is both richly deserved and a source of real hope in the industry’s. This is a book that’s pretty close to the platonic ideal of the western superhero book; character driven, facing and exploring contemporary issues and doing so with compassion, intelligence and awesome dad jokes. Welcome back, Bobby. We missed you.

Iceman issue  and both collections of the original series are out now. Start here to find your local comic store, or go to Comixology if there isn’t one.