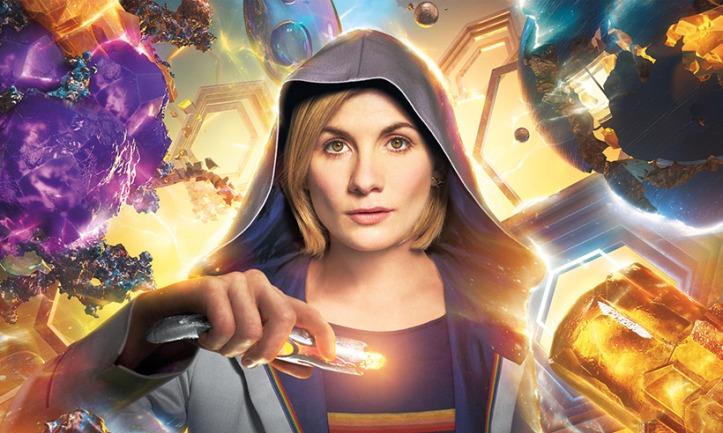 This feels like a new show. From the playful refusal to debut the new theme tune until the end to the moment Jodie Whitaker’s 13 crashes sideways through the roof of an extremely familiar piece of shitty Northern Rail rolling stock, the show is shot full of new melodies. Or maybe old melodies on new instruments.

Jamie Childs’ direction is expansive and intimate as needed and best of all, understands how cold and brittle a Northern city can be on a night. As events unfold over one brilliant, catastrophic night in Sheffield Childs shows us aliens, tower cranes and moments of nailed down drama and comedy. All of it works, but 13’s full on joy at getting to smelt her own Sonic Screwdriver is surely the standout.

Chibnall’s script is the best work he’s done on this show. People who refuse to believe a writer can change in a decade will roll their eyes at that. Let them, they’ll miss a sight gag, or Whitaker’s effortless screen presence, or a magnificently nasty villain or the subtle way her companions are linked. Or, best of all, the format of the episode. The ending is not what you expect, and then the other ending isn’t what you expect either. It’s untidy and frantic, a little ragged just like 13 herself right now and it’s the best second episode hook the show has done this century. It’s also a script packed full of subtlety. The way Ryan’s dyspraxia is revealed, the nature of Graham’s relationship with Grace. It’s all real and grounded, tired and kind in a way that feels contemporary and, in turn, a way the show hasn’t done for a long time.

But it’s the cast who show us the episode’s beating heart. Sharon D. Clarke is phenomenal as Grace, Ryan’s loving and mildly long-suffering Gran. Bradley Walsh, roundly expected to be this season’s Catherine Tate is in fact this season’s Catherine Tate. Not in the ‘HE’LL RUIN EVERYTHING!’ assumptions people had going in but rather that he’s a gifted dramatic actor who changes the dynamic of the show. Graham leaves this episode in a dark and potentially fascinating place and it’s his relationship with the Doctor that shows the most potential right now.

But that will change once Mandip Gill’s Yaz and Tosin Cole’s Ryan hit their stride. Cole is our anchor here, and he’s a fascinating one. Ryan is sharp, kind, sensible and dyspraxic and his struggle with the condition is sensibly not resolved this episode. It also doesn’t define who he is. This isn’t an Issue that has dialogue, this is a character with things he has to deal with, just like everyone else. Meanwhile Gill’s Yaz is a smart, pragmatic probationary cop who wants more. And is about to get it. All three of the companions bring good and bad to the table and all three feel like an organic, instantly likable part of the show.

And did I mention they’re all sensible?! An opening scene has them closing doors between them and an enemy. A later moment has Yaz needing to do something in a hurry and Ryan pulling up a tutorial on YouTube. All four of them have networks they can draw on, all four of them have agency. And none of them, not a single one, carries the idiot ball for the sake of the plot.

Finally, of course, Jodie Whitaker. There’s no point discussing whether she’s a good fit because she is. She is the moment you see her. She is moments before she speaks and every time she does after that only reinforces that initial impression. She’s the Doctor; kind, funny, erratic, brave and principled. The first thing she remembers about herself is that she’s good at building things. The second is she’s here to help. That’s the character, right there and Whitaker nails it in under a second of screen time. She’s the hearts of the show and it’s best moments (Facing down a teeth-faced monster, using Sheffield Steel to build a new screwdriver, the ending) are all her. She’s also not done baking yet as the show explicitly states (Along with the fact the Doctor has been this gender before or at least dressed this way before…) and the Doctor’s growth as arc is a brilliant place to start. Familiar, but infinite potential for new ground.

One of the best and certainly the oddest drama series in the Western world is back and everything old is new again and has brought some great new things with it. This is joyous. No, in fact, Macklemore had it right. This is glorious.