Jace Lopaz has a problem. Actually Jace is made entirely of problems. Jace has an exo-skeleton of problems between him and the world which every time he tries to do anything flexes and breaks something. Then falls out of something. And sometimes goes on fire. Jace is Nathan Drake without the luck. Han Solo without the swagger. And now, Jace Lopaz is someone’s designated adult.

DJ Kirkbride is one of those authors whose work is always worth seeking out and this is proof of why. From the opening mid-action scene page to ‘Oh hey! A backup story!’ Errand Boys runs with breakneck speed and cheerful abandon at everything. There’s wit and snap to every page and, because its Kirkbride and he’s one of the best in the game, constant emotional weight. Jace is an instantly likable screw up but he is a SCREW UP. Bombarded with terrible news that starts with a botched job and finishes with heading to a ridiculously dangerous planet with his teenage half-brother in tow, Jace tries his best and it is never good enough. Whether that will change across the course of the book is unclear, what’s certain is it’s going to be fun to watch him try.

A big part of that fun is Nikos Koustis‘ line work. This is big, exuberant art that’s all about motion and expression but which never sacrifices character or emotion for a cheap gag. it feels a lot like what 2000AD’s Sam Slade always tried to be but, for me, never managed; a bustling, rambunctious, mildly retro future crammed full of real people. That’s helped even more by Mike Toris’ subtle flatting work and Frank Cvetkovic’s brilliant lettering. Seriously, the lettering on this book is next level adding a different type of energy and wit to this high energy, high information world. Exuberant, complicated, people-facing science fiction. We need more of this and hopefully Jace will be making deliveries for a long time.

The Dan Slott scripted run on Tony Stark, Iron Man continues to be enormous fun. This month, romance! And killer robots! ‘Love Bytes’ sees the company swept by a dating app which instantly matches everyone, it seems, perfectly. Tony of course has no need of this, being, well, Tony Stark. Or at least that’s what’s he tells himself. There’s an early moment with Jocasta where he lets the mask slip and we see that he’s genuinely worried he isn’t entirely human anymore. We also see Jocasta good-naturedly mess with him without ever giving him the reassurance he needs. 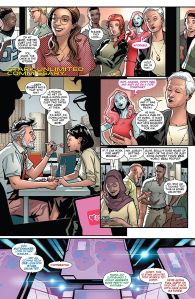 And then, Janet Van Dyne happens and it all falls away. Slott writes ‘smart, kind people banter romantically’ so well I sort of want him to write the inevitable Hart to Hart revival and that’s especially true here. Contrasting the romances of his team with his burgeoning relationship with Janet gives us, and Tony, a chance for a little perspective. Also the Vespa suit which is flat out the best thing this book has done so far. Slott excels at fundamentally hopeful transhumanism and that tone is expressed brilliantly through Valerio Schiti’s expressive, fluid artwork. Edgar Delgado’s colours give the book the futuristic sheen it needs and VC’s Joe Caramagna ensures that every character’s voice and patter sounds distinctive. A quiet, and for now very self contained, jewel in Marvel’s crown.

All these things are connected.

Sam Humphries’ script moves with a lightness of touch that marks the best urban fantasy. From the opening moment, with Nina staring in terror out of the page at us on the day of the earthquake, it carefully parks the reader inside her life. That in turn allows the script to explore the horrors of being touched by the unknown, of seeing a glimpse of the world as it is and then that slipping away. it’s heady stuff, executed with grace and with a clear eye on the real world consequences of these events. That leads to a gut punch of an ending which sets up the rest of the series wonderfully.

Jen Bartel’s art has been startlingly impressive for some time now and here, if anything, it steps up a notch. Bartel’s endlessly clean lines and precision are always a joy and give the book an extra otherworldly feel. The diner scene especially is made by this style and I can’t wait to see what happens when she really cuts loose in later issues. Likewise Paul Reinwand’s layouts cleverly focus the art and script together and give the book a tempo that feels both information dense and fast-paced. Nayoung Wilson and Bartel transition the colours from otherworldly neon to painful daylight with ease while Jody Wynne’s lettering gives us the same tantalizing glimpse of the other that Nina gets, and makes us want more just as badly. The otherworldly has rarely looked as amazing as it does here.

Clever, weird, grim and with a defiantly female gaze Blackbird is urban fantasy as it should be. Red in tooth and claw, and precise and human in execution. More please. 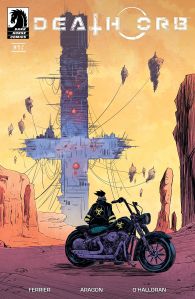 Death Orb, co created by Alejandro Aragon & Ryan Ferrier takes a very much darker approach. In a post-apocalyptic world, Rider looks for the cult who kidnapped  the mother of his child. His search is contrasted with the cult leader, Father and his attempt to reboot civilization.

Ferrier is responsible for D4ve, the best robotic accidental democracy science fiction comedy ever made and he brings the same careful, deceptively minimalist sense of invention to this world. Rider is a remarkably chatty heroic loner and there are early hints he may not be the hero he thinks he is, or fully human. Aragon emphasizes this through the fast, fluid and savage fight scenes and the remarkable sense of space to the art work. This is a world that’s as quiet as it is broken and it’s anybody’s guess who is going to carve their name into it; Father or Rider.

That sense of quiet, and doom, is further emphasized by Chris O’Halloran’s sun-drenched and heat wave heavy colors. Rounded out by Ferrier’s own letters, this is a high quality, high intensity slice of post-apocalyptic action that looks set to get even bigger even as it dials in on its personal, central, story.

Finally, A Walk Through Hell issue 5 concludes the first story arc of what I was sure was a limited series. The narrative whiplash that resulted wrong footed me for the issue although the more I think about it the more I think the decompression of narrative here may work in it’s favor. The book is, fairly clearly now, about the end of the world and that’s a subject that deserves some space. It still feels odd though. 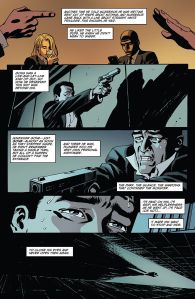 This issue’s framing character is Agent Goss. Goss is a nice guy, in the exact way that people who insist you debate them on the validity of human rights or whether women are disproportionately threatened in society, is a nice guy. Arrogant without knowing it, bigoted without caring Goss spends his time lost in the warehouse and in his own mind. Goran Sudzuka’s art is especially good this issue and in the Goss solo scenes in particular. Here the book finally irrevocably goes supernatural and that leads to a heart stopping (or perhaps starting) final image that marries writer Garth Ennis‘ twin fondnesses for horror and blue collar law enforcement bigotry.

But the meat of the book likes in Agent Shaw’s confession. The hellish case that has defined her and McGregor’s lives is revealed to have the conclusion we suspected. That means Shaw, to borrow a phrase from John Rogers, has some equilibrium with the idea she’s damned. Her partner is not so lucky. But at least he can’t see what she can, yet. Ive Svorcina’s almost monochrome, Michael Mann-esque colours have impressed throughout and continue to do sheer. Likewise Rob Steen’s letters and the sense of mounting, clear eyed horror they help the book generate. Not the ending, or an ending, i was expecting. But like I say, stronger for that.

All these books are available now.

Here’s how to find your local comic store.

Here’s how to find my local comic store, and thanks to them for these titles.

And here’s how to find Comixology.