There are some stories that need no introduction, but that doesn’t mean they shouldn’t be told. Apollo 11 is one of them and, in this new graphic novel from the always impressive Self-Made Hero, Matt Fitch, Chris Baker and Mike Collins explore the personal voyages of the three men on the mission through the lens of the mission itself.

In a project like this, where everything is not only drawn from life but drawn from extremely well documented life, you have to nail the art straight out of the gate and that’s exactly what happens here. Mike Collins’ line work speaks to his experience as a storyboard artist with its clarity and fluidity of motion. The big moments are all here and all big; ‘The Eagle has landed.’ ‘One small step’ and so on. But what’s more impressive is the way that Collins finds rhythm to the events and the story. There’s an extended sequence exploring his namesake, Command Module Pilot Mike Collins’ time alone behind the moon that dances with this off-key motion that evokes the great Tom Mandrake. Later there’s one of the splash pages which is nothing but Janet Armstrong, alone, realizing her family’s lives have changed forever. That cuts to the three astronauts, exhausted, elated and relieved, bantering on their way back. The tonal and structural shifts are big but Collins, again like his namesake, brings everything home. 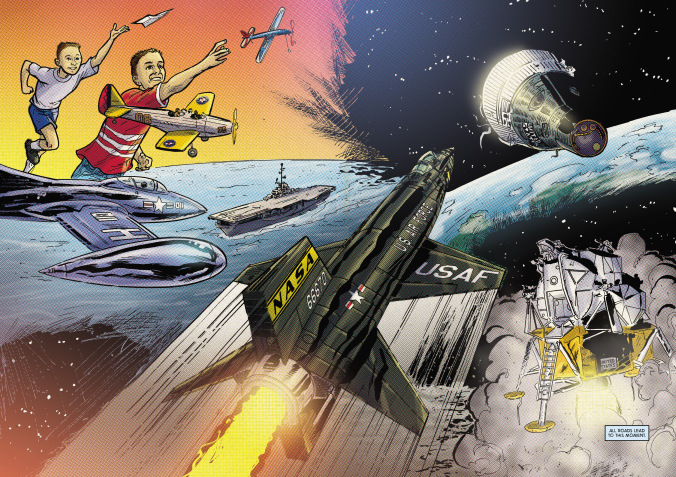 Kris Carter’s inking and coloring is equally impressive and instrumental in making the book’s deep, resonant notes of isolation work. Armstrong’s repeated visions of the home in which he lost his daughter are especially successful, the stark white of his suit a contrast to the deep sun. The Collins’ sequences too are helped here, especially a panel of Mike, the Command Module facing down, staring out into the void. Ian Sharman’s lettering is equally vital, giving the three men unique voices and balancing the technical jargon of the mission with the real, quietly honest and open conversations the crew have among themselves. There’s a clarity to good lettering and this is great lettering which helps make the book the success it is.

That success is grounded in the approach writers Matt Fitch and Chris Baker take. The moon landing is a given, but the personal journeys the three men take to the Moon are not and that’s where the book sings. Armstrong’s quiet grief for his daughter and Aldrin’s struggle to get out from under his father’s shadow both have considerable emotional weight to them and give us a perspective on the two men that many have ignored. But it’s Collins who emerges as the star here; the man left behind, the getaway driver for the whole extraordinary project left alone with his thoughts and the expectations of an entire planet. It’s through Collins, and to a lesser extent Aldrin’s father and Janet Armstrong, that we see the human benefit and human cost of the mission. Apollo 11 itself is, as memorably described here as ‘a can on a bomb’ and Fitch and Baker’s script, as well as Collins, Sharman and Carter’s art, helps us marvel at that and worry for the humans inside it.

Apollo is a compassionate, perceptive look at one of the most impressive feats in human history. it works as well as it does because it never loses sight of the people  at the core of that achievement and how they got there. If you’re unfamiliar with the history of the project, this is a great place to start. If you’re seeing First Man this weekend, then this is where you need to go next. If you’re familiar with the project’s history then you’ll find something new here. Endlessly successful and engrossing. it’s available now. Also check out the project blog for more information.