The 13th Doctor’s first season has been a sprint, exuberantly running headlong not just at the show’s future but at new ways to deal with its past. I’ve rarely had this much fun solving the puzzle the show presents itself as. That puzzle has rarely, if every been so compassionate, inclusive and open-hearted. ‘Demons of the Punjab’ in particular was pretty much a textbook definition of how to do the impossible things the show sets out to do; entertain, inform, challenge, contextualize, frequent biscuits.

13’s debut in comic form is just as impressive. Jody Houser’s script hits the ground running with an art heist that isn’t quite taking place in the century the thieves planned. From there we jump to Team TARDIS having a litttle fun, a sudden, very odd problem and a helter-skelter ride down into the plot and trouble galore. Which is of course exactly what the Doctor wants. Hates empty pockets, loves being busy, loves a biscuit.

Everything here impresses, but it’s Housers’ approach to the Doctor herself that really shines. She’s got Whitaker’s mile-a-minute, cheerful but never grandstanding delivery down perfectly and balances that with this Doctors effervescent joy at getting Stuff To Do. There’s one panel in particular that’s pretty much this incarnation in a nutshell: 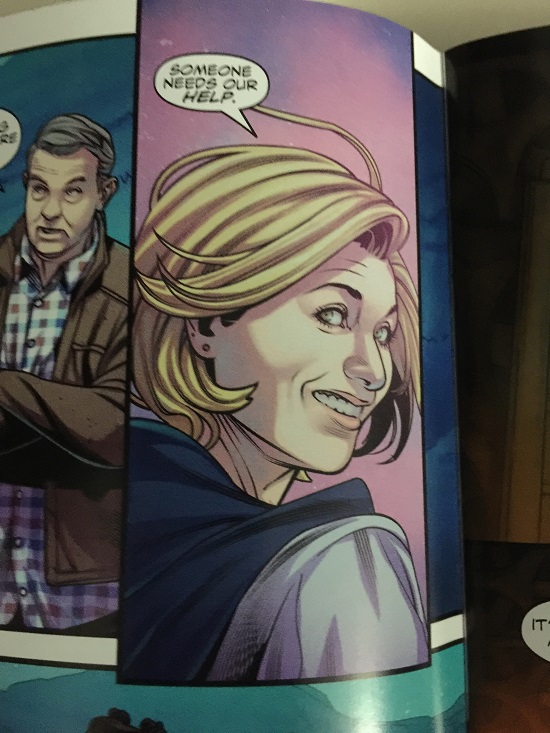 Up she gets and off at the gallop, fearful lest she comes too late and grinning because she’s got people to help and stuff to do. Houser’s 13 talks fast, thinks faster but never lets her companions get left behind. She also reveals, as the issue ends, an intriguing connection to past selves and some villains who may be nothing of the sort.

The art side of the book is just as strong. Rachael Stott is one of the best artists working in comics today and every page here gives you examples of why. Her character work is subtle, honest and expressive, her locations feel grounded in the exact way the show’s aesthetic requires and her bag of tricks is apparently bottomless. There’s a fantastic panel here showing the Doctor working the controls in four different places at once that fizzes with kinetic energy. A montage in the center of the issue gives you a raft of unseen adventures and some welcome scope. It also subtly feeds back into the mindset of this particular Doctor; authoritative, focused and leaving no one behind. It really is, like The Doctor said, a pretty flat team structure.

Enrica Eren Angiolini’s colour work is superbly good as well. From the deep tones of the night-time scenes to the rich yellow light of the TARDIS interior and a startlingly beautiful closing splash page colour is a vital part of this book and ties it to the series in an unexpected and welcome way. The widescreen aesthetic the show has embraced this year has given it a visual identity like no previous season and, thanks to the superlative work of Angiolini and her assistant Viviana Spinelli here, that aesthetic is absolutely present on the page too.

Richard Starkings & Comicraft’s Sarah Jacobs & John Roshell excel on lettering too and, like Stott and Houser play a vital role in communicating the show’s aesthetic and this Doctor’s energy. Rounded out by expert flatting by Sara Michieli, Andrea Moretto, Giorgia Sposito and Adele Matera this is a perfect team for this most challenging of launches and all of them turn in top class work.

Fast, fun, inquisitive and kind. This is the 13th Doctor in comic form and, with this exceptional team behind her, she impresses just as much here as she does on screen.

Here’s where you can find your local comic shop.

Nothing scheduled at the moment. Have an event you want me to attend? Get in touch!