The Twilight Zone: And When The Sky Was Opened

Good news is at a premium this year, so it seems darkly appropriate that two pieces of it come from the Twilight Zone. The first is that the stage play debuts on the West End next year and is a massively good time. I caught the original version in 2017 and any play that contains the line ‘Get Phil! He’s a physicist! He can help!’ is absolutely worth your time. It weaves a half dozen episodes together into a patchwork plot that’s haunted by Rod Serling. A well dressed Banquo, cigarette in hand, manifesting at whatever banquet requires him.

The second is that Jordan Peele, writer and director of Get Out, will not only produce the next iteration of the show but take on the Rod Serling role. Peele is a fiercely great comic actor and arguably an even better writer and the thought of him, immaculately suited and speaking to us from the liminal space between viewer and story, screen and life is something that makes me positively giddy.

It also drives me to make a confession. I can speak Twilight Zone but I’ve never actually visited before this year. Oh I’d seen a couple of episodes of the 1980s revival, I know the stories about the John Landis movie and what happened on the set. I can hum the theme tune, quote every The Scary Door spot.

But I’d not seen the original show. Not until this year, and a trip to the US. Netflix have the original run over there and thanks to judicious use of the download button I finally caught a few episodes. It’s everything I’d heard and more, and no episode, from the handful I saw, worked better for me than And When The Sky Was Opened.

Forbes, Gart and Harrington are the crew of the X-20, an experimental space plane that vanished with them aboard for 24 hours. It crash landed on its return and while Harrington and Forbes checked out, Gart was injured and kept in overnight for observation. The next morning, Forbes visits his old friend, visibly shaken. Because something is stalking the three men, and it’s already erased Harrington from existence…

This episode is, quietly, the spine of the stage show. There’s a recurrent visual gag through it, and the show, with the newspaper story about the X-20’s return. Every time we see it there’s one crew member less until the story disappears. And that’s both the conclusion and the story; the X-20 and its crew aren’t, it’s heavily implied, supposed to still exist. So, slowly, methodically, time erases them and every memory of them. The horror lies not in thatg but in the fact the process is methodical. Forbes is the only one to remember Harrington. Gart is the only one to remember Forbes. No one remembers Gart and by extension, the other men. Time, entropy, Death, call it what you want, it wins and that outcome is never in any doubt.

So if the outcome is never in any doubt, what’s the point? 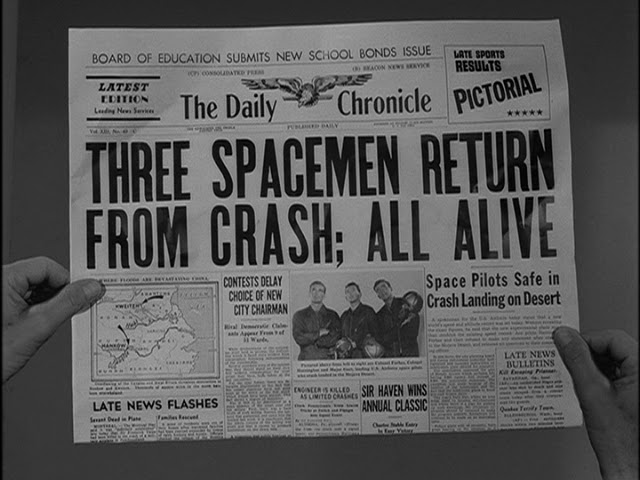 Time because this is a story very much of its time. Forbes, Gart and Harrington are square jawed fighter jocks made entirely of booze, cigarettes and Danger Zone. They’re the embodiment of confidence, the can do spirit of a country where bottomless coffee is a thing and the Moon only  takes a decade to reach. They already balance on the edge between sex pest and charmer, roguish hero and boorish pilot long before they skirt the edges of the atmosphere and the Twilight Zone. They’re all Chuck Yeager, with none of his racism and all of his bottomless confidence and seeing that stripped away is both horrific and, weirdly, on some level a tiny bit satisfying. This isn’t them slipping the surly bonds of Earth and touching the face of God. This is them slipping the surly bonds of Earth and God looking them straight in the eye and going ‘YOU.’ As the existential horror hits, all three men turn on a dime and all three central performances are genuinely great. Rod Taylor as Forbes, who we spend most of the episode with leaves it all on the field as he comes apart at the seams. Charles Aidman as Harrington sets him up perfectly and we see most of the process of removal work on him. Harrington slowly, then all at once, simply stops being and Aidman shows us just enough for us to know he’s aware of it happening. Finally Jim Hutton as Gart brings the episode into land with the completed emotional journey. Harrington lives long enough to see it coming. Forbes lives long enough to see Harrington die and try and warn Gart. Gart lives long enough to see none of it matter. Horror, three different ways. 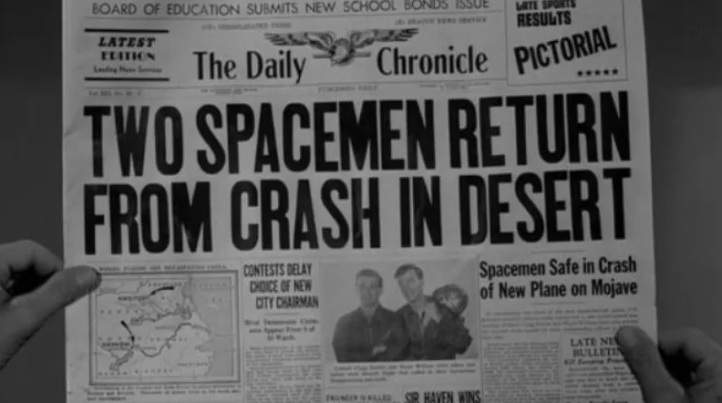 Context next. Cultural context specifically. The episode was broadcast two years before Alan Shepard became the first American in space. The Mercury Project was public knowledge by the time the episode was broadcast so it would have been both subversive, and deeply disturbing, to see at the time. America’s finest, stalked and removed by the most implacable, inescapable of predators. Men of their time, annihilated by something they have no hope of opposing.

You can draw a straight line between this episode and Sapphire and Steel, the classic British show about (possibly) human agents fighting an endless holding action against Time itself. You can draw a different line, just as straight, from here to The X-Files. The shape of the X-20, Hell the shape the X-20 leaves in the story, is The X-Files to a tee. Something terrible under armed guard. The Truth not so much out there as in here, with you, slowly taking you apart. The trail head of every conspiracy, explained by a well-dressed ghost who is far more at home out here in the dark than you or I will ever be. 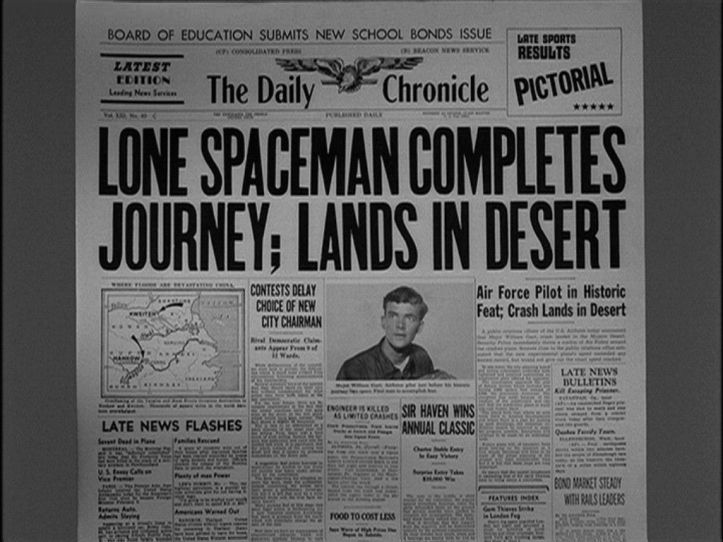 And finally, heroism. Not (or perhaps not just) the panicked pragmatic heroism of Forbes trying to warn Gart but the heroism of the audience. Because here, not looking away is an act of bravery not voyeurism. Here we witness the end of three men not because we want to see them bleed but because we want them to be remembered. And because, most of all, they get to leave the Twilight Zone. We choose to stay there. And if that’s the case, then remembering these men is the least we can do for them.

The Twilight Zone is all available on Blu-ray and, depending on where you live, various streaming services.