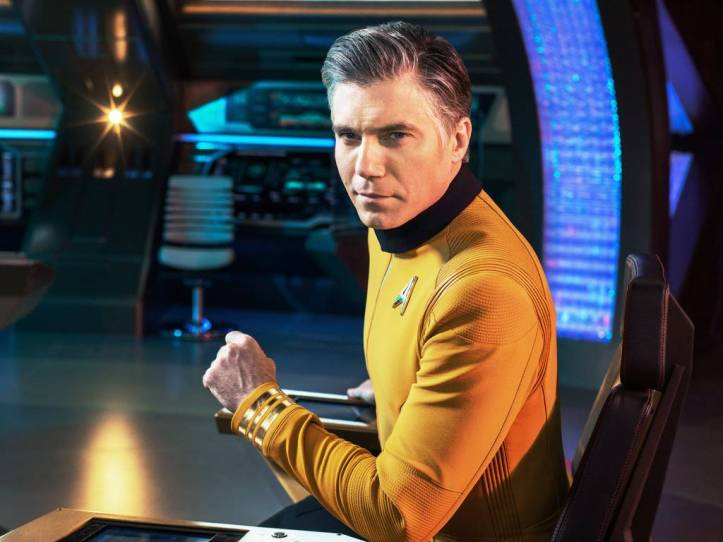 As Christopher Priest (This one not this one but both do good work) pointed out, a magic trick has three elements to it:

Last week’s episode of Discovery was built this exact way and almost all of it based around the gentleman in the big chair up there.

Captain Christopher Pike is one of Starfleet’s kings beneath the hill. The second captain of the Enterprise, the first lead of Star Trek. Like many elements,  the original version of him has aged badly but Pike’s ideal remains intact. Honest, direct, leads from the front. All things Disco‘s previous captain, Gabriel Lorca, was not.

So straight away the show’s given you something familiar and used it to upset the balance in a variety of ways. Pike comes aboard to take command, and introduce the plot. The previous, erroneous, belief that Discovery is in its own timeline neatly evaporating in a cloud of carefully redesigned uniforms, good-natured inter-crew rivalry and a sexist dudebro science office being turned into jam by an asteroid. All of this, on it’s own, is great. Pike as the avatar of canon, Pike as a steadying influence on the crew is brave, smart writing.

Anson Mount (Who has done a ton of work for EA, all of it brilliant, all of it here) plays the Captain as an instantly, profoundly likable and approachable man. He jokes with Tilly during his on-boarding process, uses an administration error to explicitly state to the crew that he’s not Lorca, goes out of his way to tell these people they’re okay, that he’s got them. He’s relaxed, informal, one of them.

And then this happens.

I’ve watched that sequence a half dozen times this week and I like it even better every time. It’s not just Anson’s instantly charming take on Pike either but the subtle wave of emotion that rolls around the bridge as they sound off. These are war veterans, survivors of an abusive work place to boot who are used to being treated as nothing more than parts of the ship that talk. Hell, most of them didn’t get names last season. And now, they’re riding into who knows what with a Captain they met a minute ago who has gone out of his way to make them feel like people.

But the Prestige in this scene, the rabbit where there couldn’t have been one, is the way it escalates when they detect the USS Hiawatha. You can see Pike react not just to the situation but to the controlled skid of his own emotional reaction. You feel the dead stop in the music, the direction, the scene when he snaps at Burnham. Then you hear the remarkable compassion in what Burnham’s saying in subtext:

‘It’s okay. We know this is your damage. We’ve got you too.’

And better still, the gratitude under Pike’s response. Parallel wounds healed in parallel kindnesses. A rabbit where there couldn’t be one. A crew of people, not components. That’s a Hell of an achievement and a Hell of a start for the show’s second season. And Pike hasn’t even found a red thing yet.

Star Trek: Discovery season 2 is on CBS All Access in the US and Netflix everywhere else.
The Well, the podcast Anson and Branan Edgens produce about creativity and where it comes from, is fantastic and available here.