The Places We’ll Go: The Expanse Is Just Getting Started

The Expanse begins in the final minutes of its third season. Which is a hyperbolic exaggeration on one hand and a salute to the sheer audacity of the first three seasons on the other. In the space of under 40 episodes the show has shifted from ‘traumatized survivors busk their way through a political scandal’ to ‘manufactured war between the planets’ to ‘first contact’ to ‘political intrigue’ to ‘welcome to the galaxy.’ Each progression has been baked into the DNA of what’s preceded it and the result is a show that’s followed a silky smooth trajectory out into new space. Alex Kamal would be proud. This leads to the final scene of season three making the show’s name it’s premise and fixing it’s previously somewhat broken leading man. This,excellent, recap video by Zurik 23M brings you up to speed

The Expanse, as I say, has become literal. 1300 gates to other systems. The blood-soaked gold rush Holden references is going to be larger than anything else in human history, simultaneously dwarfing and magnifying the extant problems. We can go, functionally, anywhere now. So why fight over the Solar System? Just move to another one. Endless opportunity and 1300 places to disappear. This IS going to lead to something terrible. it can’t not. And it can’t be stopped even though it’s definitely going to lead to something terrible. This is what everyone’s wanted, all at once. It’s going to be magnificent. It’s going to SUCK. It’s going to take the rest of their lives to sort it out. And we could only get here after three seasons of gradual, persistent escalation. 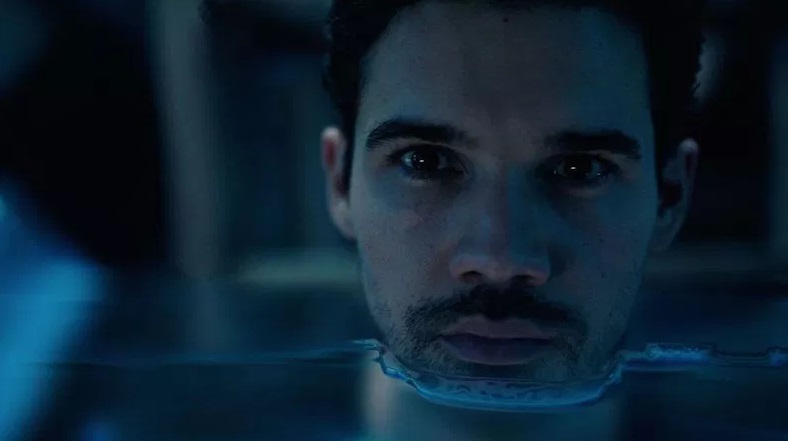 Which brings us to the crew of the Rocinante themselves, and, specifically, to Captain Terrible Life Choices up there. Steven Strait has always been great as Holden but Holden has often been hard to like. He’s the best, and worst, kind of hero; reluctant and unkillable. For three seasons the show has put him and his rotating cast of ragtag fugitive crew members in the worst possible place at the best possible time and Holden has always been the one who’s dragged his feet. While pilot Alex, team pitbull Amos (#murdersnuggles), marine sergeant Bobbi and endlessly patient and competent engineer Naomi have all adapted, Jim’s…well he’s adapted too. But often loudly, complaining all the time and shouting at the others as he does so.

But this season that changed. Not only because he’s confronted with the price of his celebrity in the final episodes but because Jim turns and faces his nature and makes peace with it. The line of the season, delivered by the silken growl of Shoreh Aghdashloo is:

‘I realized how few adults there were in the room. And like it or not, I was one of them.’

That line has a…certain personal resonance for me and it hits Holden right between the eyes. Across the course of the back two or three episodes you can see him suddenly realize that it’s actually okay he’s always in these situations. It’s not much more than okay but it’s not a ghastly human failing as long as he makes sure as few people as possible are killed. In fact it’s massively significant that the end of season two is entirely about Holden trying to make something die and the end of season three is him frantically trying to make sure everyone lives.

That in turn leads into some very interesting territory for the crew in general and James Holden in particular. The Rocinante is now too famous to be killed and Holden is the man who ushered in the new age. The fact he did that with an alien computer wearing a police detective’s ghost whispering to him isn’t widely known. The fact that Holden has figured out that the thing in his head wants to solve a genocidal murder that happened before humanity existed, even less so. For now.

The Expanse was cancelled at the end of season 3 and then resurrected by Amazon. I can’t wait to see season 4 dig deeper into this armada of brave new worlds but I also find myself marveling at how well this season would have served as a capstone. Holden secure in what he is and what he has to do, every human conflict dwarfed by opportunity, a universe of doors opening. Not closure, sure, but evolution undeniably. That would have been enough, but thankfully, we do get to see what happens next.

The Expanse seasons 1-3 are on Amazon Prime now and are fantastically worth your time. Season 4 will arrive later this year.

This piece originally appeared as part of my weekly newsletter, The Full Lid on 15th February 2019. If you liked it, and want a weekly down of pop culture enthusiasm, occasional ketchup recipes and me enjoying things, then check out the archive and sign up here.