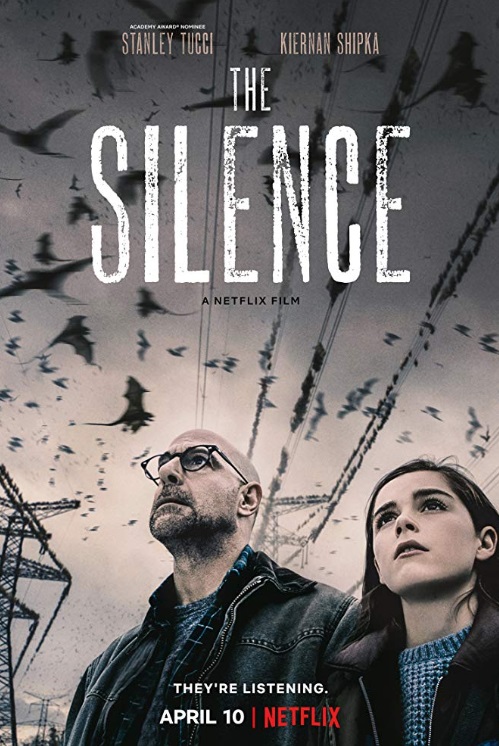 I am always there for a horror movie that dances the apocalypse two-step like it’s a mosh pit. The opening 10 minutes of The Silence do exactly that, as a cave is unsealed for the first time in centuries and mere anarchy is loosed upon the world. And mere anarchy is feeling really bloody Hungry. In their way is the entire continental United States and specifically the Andrews family. Hugh (Stanley Tucci) is a precise, intellectual architect. Kelly (Miranda Otto) is caring for her mother Lynn (Kate Trotter) while kids Jude (Kyle Breitkopf) and Ally (Kiernan Shipka) get on with the business of being kids. They’re an instantly likable group defined as much by what they don’t say as anything else. Hugh’s business is struggling, Lynn is hiding a medical condition from most of the family and thinks she’s hiding her smoking from all of them. Everyone’s still adjusting to Ally’s hearing being lost in a car accident, except, perhaps, Ally herself. They’re instantly complicated, instantly likable. A family minus its corners and completely unaware of what’s coming.

That’s where the Van Dyke’s script, and Tim Lebbon’s original book, not only come into their own but break ground horror too often ignores even now. These are smart people who make smart choices. They evacuate the moment it becomes clear they can’t stay, they stock up on whatever they can, go off road when the highways cease up and it’s still not enough. By the mid point Hugh in particular has had to make several tough choices (There is not good dog news in this movie. Not on screen thankfully but still, fair warning) and the family’s modicum of peace comes at the expense of someone else’s life. This is societal collapse from the ground up, the ragged edge of apocalypse meaning utilities fail at random, people miss the news that could save their life and danger is everywhere. The slow ticking clock of mortal necessity means the Andrews never stop running for the entire movie, their every control eaten away by the endless, ravenous hordes. If A Quiet Place was about adjusting to this strange new world, The Silence is about trying to survive long enough to adjust and not everyone does. One of those early gags folds into this far more than you might think and it’s just one of the knives the movie is hiding behind its back. There is the single smartest weaponisation of sound I’ve seen in fiction here. while the ending, set up by a single, chilling note held up by a stranger, is the least Hollywood ending I was expecting. The miniature war that breaks out is untidy and savage as the family defend themselves at close quarters with all the panic and brutality you’d expect but never normally see.

Smart and tough choices abound here but they aren’t universal. Both Trotter and Otto are given relatively little to do and the movie hit turbulence for the casting of Shipka, a hearing actress, as a deaf character. Director John Leonetti’s defence of the choice has justifiably not sat well with anyone. For some, understandably, that’s going to be a deal breaker. Representation matters and for it to be changing is fantastic. For it to be changing this slowly? Much less so.

However, if you can put that issue aside The Silence is great. It’s an epic apocalypse that lives in the grace notes, a story about a family that never loses sight of that even as everything burns down. Smart, tough, brave and merciless, it’s on Netflix now.