Directed by Karim Amer and Jehane Noujaim and written by Amer and Erin Bennett, The Great Hack is the story of the Cambridge Analytica scandal told through several perspectives. One is David Carroll, a New York academic who took them to court to see the data they had on him. One is Carole Cadwalladr, the dogged journalist who has at times almost single-handedly dragged this story out into the light. One is Brittany Kaiser, a former CA senior executive turned self proclaimed whistle-blower.

I didn’t think a movie could make me angrier than The Uncivil War this year but The Great Hack used 5000 points of data to manipulate me into wanting to hold its beer and here we are. But where the former hid craven greed and ambition behind the tattered comedy shield of our new unelected Prime Minister’s buffoonish racism, The Great Hack is far more insidious in it’s dishonesty. This is a film about arguably the most significant data manipulation in human history and it too tries to manipulate you even as it is itself manipulated.

There are numerous scenes, especially in the material dealing with David Carroll, that see text messages or tweets being exchanged. We see them appear, Sherlock-style, on screen as they happen. It becomes impossible, early on, to believe they’re happening in real time. Whether because of the special effects or the odd nature of the movie’s time frame you don’t know when this material was being filmed. The careful neutrality of it smacks of it being a re-enactment, the language too. But we’re denied certainty. The facts massaged into the narrative in much the same, maddening, way as the final third of Knock Down The House does. 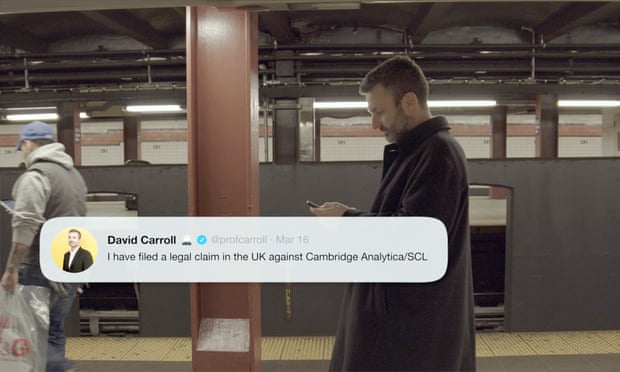 But Carroll isn’t where the movie’s biggest faults lie. I’d argue it doesn’t spend anywhere near enough time with the patient, methodical academic in fact. No. The issue here is Brittany Kaiser, what the movie does with her and what it invites us to do as a result.

Kaiser is presented as a whistle-blower, which is the first lie. She put herself forward as one the day after she was named in an article on the scandal. The film bends over backwards to create a sense of Bondian drama around her. We first meet her in a carefully anonymous hotel in Thailand (no extradition treaty). She spends much of the movie under massive hats and rock star sunglasses. The faded starlet glamour curdling with the rank ambition of late stage capitalism and the endemic sociopathy of 21st century tech culture.

That’s the next problem and the moment the movie slips from documentary to narrative. You hate her, instantly and viscerally and that’s exactly what the movie wants you to do. Kaiser is the perfect villain; monotone voiced, clearly independently wealthy, never expressing a scintilla of guilt or shame for her work until an epilogue text piece (and a deeply patronizing silent opening at Burning Man). She’s Cruella de Ville with an AmEx card. A pantomime villain held up for all to boo even as she cashes her book advance. 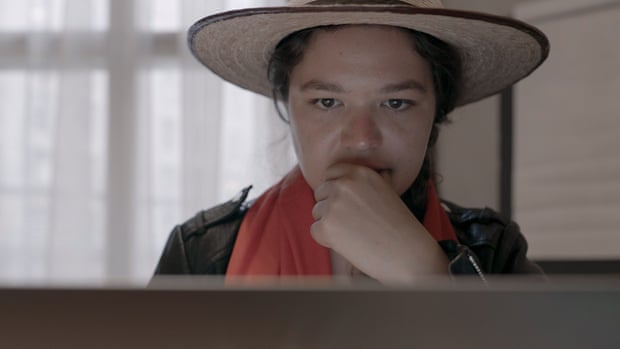 She’s also the embodiment of a systemic failure of care the movie demonstrates for everyone involved. Carroll is shoved to the side and rendered into an increasingly banal framing narrative. Cadwalladr is an exposition machine scattered throughout the movie. Kaiser’s role and work at CA is streamlined, omitting her liaising with Israeli intelligence in Nigeria for one and almost all of Brexit for the other. Neither fit the narrative of Kaiser the yuppie coming in from the cold. The film, from this point especially, isn’t even a little interested in the shape of the truth. It wants to build a narrative around her. It wants us to hate her and then see her redeemed but it’s so busy, so over excited that it never notices everything else it’s missing. Brexit financier Arron Banks is relegated to an afterthought, Robert Mercer, a footnote. Carole Cadwalladr gets maybe 20 minutes. Actual whistle-blower Chris Wylie is barely mentioned. Kaiser? Over an hour of the movie focuses on her and it asks progressively more of us, even as it stops asking any questions at all of her. We never find out why she was in Thailand. We never find out who she didn’t want to be found by. We never find out why that apparently no longer matters. We never find out where her money comes from, or how she’s able to go to London and flee to New York on a whim. We barely get any context for her transition from Obama volunteer to giggling along with the ‘oops we won’ meeting about Brexit. There’s always a new hat. Always a new pair of shades. Always a nervous chuckle. Never guilt. Or shame. Never horror. Or complicity. We hate her. And the movie wants us to. And even as it fails, and it does, to redeem her, it manipulates us in the exact way CA did and continue to do so in all their Hydra-like spin off firms. Arguably worst of all? This is the laziest, most obvious narrative the movie could possibly have gone for not to mention the least successful. Make a woman a target. How crushingly original.

The nadir of all this comes when the political technologist Kaiser is working with says, with a straight face:

Except she didn’t. She made choices.

Everyone who worked for that firm for more than the time it took them to figure out what they were doing made ethical choices. That doesn’t mean they can’t change their minds. But ‘oops we won’ means none of them, Kaiser especially, get a free pass for a damn thing.

I’ve dunked on The Great Hack for close to a thousand words now. I think it got far too close to it’s subject matter, chooses entirely the wrong lens for the most cynical of reasons and embodies the absolute worst excesses of the shell shock that so much political journalism suffers from. It questions nothing when it should question everything and everyone and suffers desperately for that.

But for all that, and honestly this may be what infuriates me the most, there’s worth in The Great Hack. It surveys the wreckage CA and Facebook have left in their wake and finds a trio of haunting images. Julian Wheatland, petulant inheritor of CA looks for all the world like a minor Le Carre character, betrayed and unable to see by whom. Alexander Nix, the living embodiment of upper class entitlement transitioning effortlessly from charm to belligerence to bleating the same meaningless attack points about the liberal media and how they were apparently instrumental in his company buying and using Facebook data to influence foreign elections. The incredible moment where Kaiser, testifying against Nix, receives a supportive text message from him about how well she did. The film excels at almost nothing but these tiny moments of untidy human emotion. If it had leaned in to them, it would have been infinitely more valuable. As it stands, the kindest thing you can say is it engages with the subject matter. Hopefully its successors will do better.

The Great Hack is on Netflix now.