For some reason YouTube just will not embed this scene despite the fact I can link to it three times in one sentence just fine. Cheeky fuckers.

Anyway, let’s talk about Admiral Clancy and how she’s part of the best scene in Picard to date, not necessarily a villain and a perfect embodiment of, as Tasha Yar once yelled, what Starfleet is, what it represents.

We meet Clancy when Picard goes seeking help. He enters diffidently and with respect for their difficult past, explaining the following:

As the clip shows, it doesn’t go well. Sufficiently unwell in fact that Clancy is now part of a YouTube video called ‘Picard vs Bitch Admirals’ because it turns out that men who really truly are terrified of everything often have YouTube accounts.

More pertinent to us here is the fact that this scene is a perfect judo throw in narrative form. We’ve been inside Picard’s circle, we’ve seen everything he’s seen. We buy in completely and the weight of the man’s years of service only drives the point home harder. All he needs is a ship, how hard can it be?

Imagine being someone else in Starfleet. Imagine watching the Enterprise inch into drydock, or watching Picard return to duty after coordinating the Battle of Wolf 359 for the Borg. Imagine serving in Starfleet through two Borg assaults, the Dominion War, the Romulan supernova and the loss of Mars.

Then, imagine being a member of Starfleet, watching it’s best and brightest walking away in disgust and knowing he either blames you or you aren’t strong enough to follow him.

Kirsten Clancy isn’t a bad human being. She’s probably not even a bad Starfleet officer. But when the favorite son sweeps in after throwing what, from her point of view, is a tantrum, she reacts the way a lot of us would. This, at last, is a chance to land a shot in retaliation. It’s a petty reason but it’s one which gives us a 360 degree walkaround of the issues at the core of Picard and, crucially, helps the man himself become less grounded. He knows Starfleet won’t help him. He knows they’ll tar his crew with the same brush. So he goes to his other crew, the people as damaged as he is. That’s a massive narrative shift for such a small scene but boy does it work.

That’s even before you get to Clancy reporting in and its delicious ambiguity. You could see her briefing her superiors as a co-conspirator running to her cell leader. I see it as someone who has taken an easy shot and… it left a bad aftertaste. Something in the old man’s words tickles, something tells her to listen to him. So she files the report up the chain and lets someone else worry about it for once. Not a villain, just human and sometimes that’s all you can be. Not evil, just exhausted, sad and frightened.

Clancy, played with exhausted venom by Ann Magnuson, is contemporary Starfleet in a bottle. Three separate, nearly incalculable waves of loss in two decades. And that’s before you get to the mammoth ‘dare to be great’ moment of the Romulan evacuation, the shattering tragedy of Mars, and the fact that Starfleet ultimately chose not to be great and has yet to recover.

Starfleet at its finest has always been an organization that goes in first and asks questions once it’s helped. Seeing them turn like this isn’t easy, but it’s also not surprising. This isn’t villainy, it’s exhaustion. This isn’t cruelty, it’s terror and panic and PTSD shaped like a career. That doesn’t make it right or even forgivable, but it does give context that draws you up short. 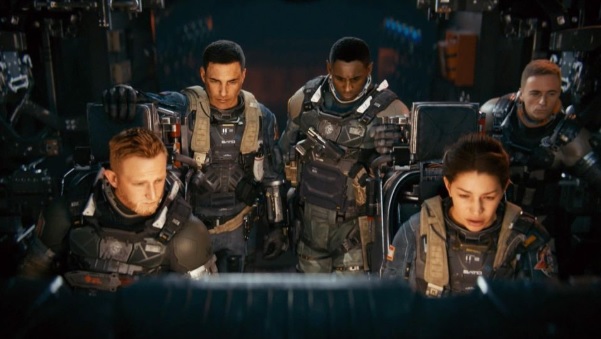 And that brings us to this meeting of the annual ExoSuit Enthusiast Club.

These are the main cast of Call of Duty: Infinite Warfare or, as it’s called in this household, Battlestar Guest Appearance.

It would be easy to look at the SCAR (seriously, that’s the acronym) team in Infinite Warfare as the end point for Clancy’s Starfleet. They are entirely martial in outlook, fiercely competent in every form of combat and beleaguered in the exact way Starfleet no doubt feels.

As Commander Nicholas Reyes (performed by Brian Bloom, surely one of the all time MVPs of video games acting), one of the very first things that happens to you is the worst kind of battlefield promotion. When Earth’s Navy is decimated by an attack from separatist colonies, you find yourself the most senior officer still standing on the Retribution (seriously, that’s it’s name), one of two ships still active. The weight of duty and expectation is on you from all sides whether it’s Marine Staff Sergeant Omar (David Harewood, a man incapable of turning in bad work) or Jamie Gray Hyder as your fantastically intense wingwoman, Salter. You’re not the right man in the right place at the right time, you’re the last adult left alive in the room. It gives the game some welcome tension, and a lot of your actions more weight than the distinctly railroad’y game structure deserves as a result.

You have free reign, within about ten missions, to travel the solar system causing trouble for Kit Harrington’s army of motiveless space Nazis, many of whom have Russian names. Hilarity, bloodshed and just AMAZING quantities of heroic sacrifice ensue. I know I’m busting on it a bit here and honestly it’s deserved. This is a game where you’re told ‘I’ll see you in hell’ twice inside an hour by two different people and a lot of the dialogue isn’t much better than that. The ending, where you progressively lose more and more of your now tiny crew storming an impossible location, has pathos to it at least. In contrast, the opening is just a bicep in search of a flex, a frown in search of a Battlestar Galactica episode to nest inside.

But it’s only as the game completes that you come to realize what’s going on. Almost the entire cast is lost in the final assault and, while the ending is maddeningly brief, the sacrifice hangs over the back of the game It’s then you realize that the UNSA and their SCAR teams, in fact aren’t where Starfleet is heading, but where it’s been. UNSA’s survivors have the luxury of a future. Starfleet, as we see them in Picard, have the obligation to map the future and just don’t have the strength.

Admiral Clancy and the Starfleet she represents have done terrible things but are not explicitly evil. Their crime is also their tragedy; they know this. UNSA have the ‘luxury’ of recent trauma. Starfleet have the complacency of time and, somehow, refusing to die. That complacency has made them unwilling to face the corruption in their midst but only as a group. Starfleet the idea is curdled. Starfleet the individual is anything but. Because of Admiral Clancy and that call she places.

I think the show is already seeding its finale (I have STRONG suspicions about the plot but, whole other newsletter). I think Clancy is a big part of that and she is in the end going to come through. Reporting Picard’s request despite her disgust shows that. Looked at one way it’s an underling reporting in. Looked at another it’s the flames of duty and honor, guttering at least once more. I don’t know if Picard would approve, but she wouldn’t buy another drink as long as she was on the Retribution, that’s for damn sure.

Infinite Warfare finishes with the refrain ‘peace to the fallen’. I’d add, in Clancy and Starfleet’s case ‘and peace to the future’. Their moment is coming. I hope they’re ready.

Call of Duty: Infinite Warfare is out now and pretty cheap. Trust me, you could do worse than ten hours of Space Varric in your life.

Picard is  on Amazon Prime in the UK.