Vivarium: Home Is Where The Art Is 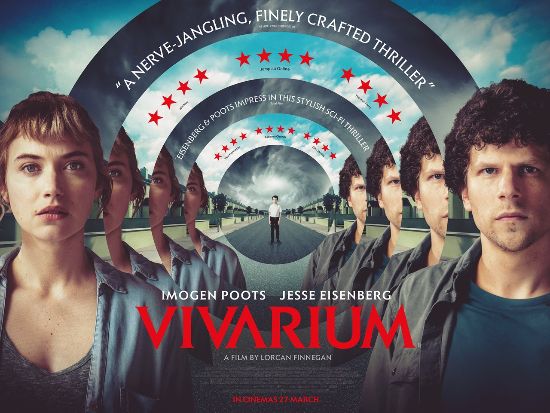 Serendipity, like Ayn Rand, is a hell of a drug,just one that doesn’t mutter something about the free market while throwing you down a well. Instead, it means that a brace of horror movies that were already good have been made better by the frankly terrifying world circumstances in which they’ve been released.

First we had Sea Fever, and now Vivarium.

Written by Garret Shanley from a story by Shanley and Lorcan Finnegan (who also directs) it stars Imogen Poots and Jesse Eisenberg as Gemma and Tom. A school teacher and groundskeeper, young, in love, looking for a home and having the same luck most people do. Until they meet the estate agent, Martin, played by Jonathan Aris. Martin wants to show them Number 9 in a development called Yonder. He’s not taking no for an answer.

Sea Fever‘s quarantine subplot is what gives it so much resonance right now. Vivarium is much more suburban and much more insidious. From the moment they follow Martin out Yonder, Gemma and Tom are doomed. The estate is a Lament Configuration furnished in avocado and turquoise horror. Endless rows of boxy houses. Each cheerful, identical, and barren. Each made out of ticky tacky. Each just the same.

This is the horror of time having no meaning. This is the horror of March being sixteen years long and April under a minute. As Gemma and Tom continue to struggle, to look for a way out, the house is the gravitational pull at the heart of their tiny, shrunken universe. They’re safe in the house. Or at least, in less danger. Resistance filed down by consistency, the persistence of time stretching a scream into a yawn. Familiar and comforting, if disconcerting.

Until the child arrives.

RAISE THE CHILD AND BE RELEASED
The message left by their unseen captors is as impossible as it is inescapable. It drives Gemma and Tom into equally uncomfortable, unsuccessful and familiar coping mechanisms. Tom tries to muscle the problem, literally working himself to death to dig a hole out of their prison. Gemma alternates between trying to understand the problem and bonding with it. Neither work.

Ironically, the arrival of the child throws both of the central performances into stark relief. Eisenberg clearly enjoys playing something other than ‘nervy, over articulate genius-asshole’ for once and his Tom is a stolid, glowering and ultimately sincere presence in the movie. Poots has the heavier lifting to do and more than rises to the occasion. It’s Gemma who discovers the true nature of their child, Gemma who ultimately battles it, and Gemma who understands their situation and defies it, even as it kills her.

But the Child. My god, the Child. Côme Thiry plays him as a baby, Eanna Hardwicke as something in the shape of a young man and Senan Jennings gets the most screen time as the younger version. The Child is a very convincing sketch of a human boy: the right proportions and behavior and appearance. But when he opens his mouth, it’s only ever to perfectly mimic a parent or to speak in a voice which sounds like a bass speaker being choked to death.

He’s rampant and alien, innocent and insidious, malicious and frail and the most unsettling element of a deeply unsettling movie. The moment he turns to Gemma and says ‘ArE yOu FeElinG OvErWhElMeD AgAiN, MoThEr?!’ is nails on the chalkboard in the best way. It’s also interesting that no one is saying who voices the Child. I suspect it’s Aris given what the movie implies. Regardless, Aris(?) and Jenning’s performances mesh beautifully.

For two and a half of its three acts, Vivarium is a slow burn exploration of supernatural stress and the humans caught in it. It makes terse, clever points about the holes in coping mechanisms and gives Eisenberg and Poots some of the best material of their careers. Then, in the third act, it and the Boy alike skitter sideways across the perfect street and dive into the nightmarish world beneath it. We find context, we find the truth. For Gemma, it means a terminal kind of release. For the audience, the closing scene which places us back where the movie began, restarting a life cycle we now understand but are powerless to stop — complicit observers as another nest is filled.