Killian has a problem. Killian is a problem, a young thug who’s badly screwed up. Driven out to the bogs by old friend and mentor Keano, and Gerry, a man who no one calls friend, Killian escapes. Wounded, terrified and on the run, he meets Neev, a young woman in a similar situation and together they run for their lives.

This is one of the earliest panels in the book: 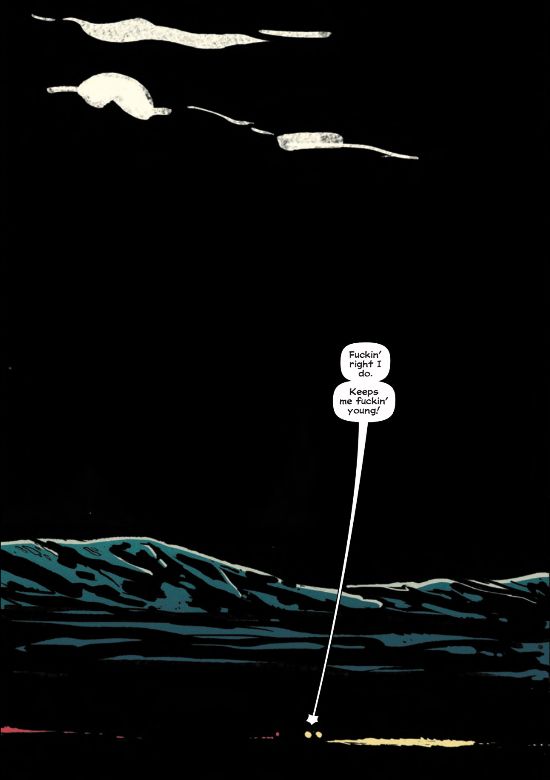 I’ve driven the kin of these roads. Roads haunted by a hundred thousand bikers once a year, roads that connect one side of the Isle of Man to the other, even though no one’s entirely happy about that fact. These are Irish roads rather than Manx ones, but that sense of writing yourself into and out of existence as you move is something very familiar to me.

It’s also, quietly, one of the book’s central themes.

Shalvey has a glorious ear for dialogue and a tremendous eye for the horror of the mundane. There’s an early extended sequence when Killian escapes, running across flat land, in decent light. Gerry and Keano watch him go, discuss the plan, express annoyance that they’re having to do this at all, and then go on with their business. This is a day at the office for them, death riding in the back of the car and asking whether you’d mind turning the radio up.

The relationships in the book are brutal in their simplicity. Gerry wants Killian dead. Keano… kind of does but feels bad for the kid. Killian wants to live. Neev wants to know who she is. All of them want to live. They’re not all that lucky. That stark black landscape, the sense of your footprints and your presence slowly fading away? In this book, everyone faces it.

Bog Bodies feels like the platonic ideal of a crime story: pared down, focused and character-centric. Gavin Fullerton’s line art here gives the book’s characters the sweaty, panicked, lived-in feel they like to pretend they don’t have. Gerry is a seething little ball of hate whose entrance is a highlight of the entire story. Keano is a Gleesonian big man with some interesting secrets and the most backbone of the lot. Killian is desperately young, a man’s crimes in an idiot child’s body. And Neev is a ticking timebomb of terror and rage, disgusted at the fact she has somehow been decided on as a victim. All of them orbit the bogs, and the ties that bring them there, like a constellation of panicked stars circling a black hole. 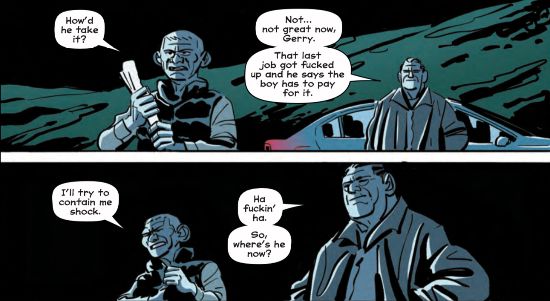 But what really shines are Rebecca Nalty’s colours. Look at that pair of panels. Look at how the moon lit countryside works as a backdrop for the way the light falls on Gerry and Keano. Both men half in shadow, one happier about it than the other. Look too at the smear of red around the boot, the brake lights covering the car in the metaphorical blood neither man wants on their hands. This is GREAT, clever, stuff and every element of the book exists in lockstep with every other. Look at the lettering from Clayton Cowles too, as rounded and relaxed as the way the men talk to one another and with just as much of a hard edge under the surface.

But let’s go back to that car, writing itself into existence up in the hills, filling every page with that sense of impermanence and danger. No one’s on solid ground, as the book slips (literally in one case) into jet black comedy and then into something even richer and stranger.

When the night ends, everyone has their answers, and none were expected. What you have is one hell of a book, and a story that shines intensely bright, even up there in the dark.

Bog Bodies is out now. Please, if you can, buy it from your local comic shop – they really need our support right now. You can find yours here.