Darkness on the Edge of Town: The Vast of Night 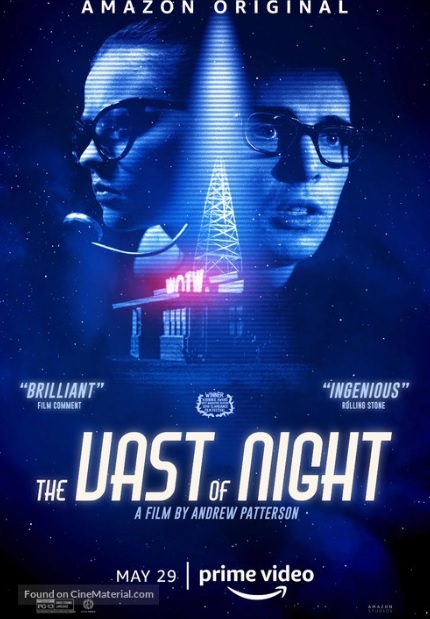 Cayuga is on the border between Texas, Twilight Zone and The Outer Limits. A town so small you can cross it in one dizzying four minute tracking shot. Cayuga is deeply devoted to two things: tonight’s basketball game and whether it was a chipmunk or a rat that bit through the wires in the hall that time.

Everett (Jake Horowitz) is the local DJ, not so much a big fish in a small pond as the first fish to work out that walking on land is a REALLY cool idea. He walks, talks, and thinks fast and everyone he doesn’t work for is either impressed by him, has a crush on him, or wants to be him. Fay Crocker (Sierra McCormick) is a high school student with a love for the unknown that dwarfs the town she’s outgrowing. She’s brilliant and she and Everett have the type of chemistry two people have when they can’t figure out if they’re kindred spirits or desperately in love. There’s definitely something there, but it’s a little too dark to see quite yet.

Besides, it’s game night. Everyone in town is in the same place, except them. It’s a perfect chance to find ways to spend time together while their back brains work out what they want from each other.

Only there’s an odd noise in the sky, and a caller with a story that will absolutely be the biggest thing that’s ever happened to them. Life has come to Cayuga, and it hasn’t used the interstate to get there.

First and foremost there’s the mystery, which Sanger and Montague play out with the skill of a good stage magician. Fay hears the noise first and, whether as an excuse to talk to him or because he’s Everett, passes it to the DJ. Everett in turn puts it out on the air, they get a call from someone who’s heard it, before and we’re off to the races.

The script does a brilliant job of wrapping motives around one another and shifts subtly from a not-quite-romance to a fable about the perils of ambition to something far more extraordinary. Everett jumps at the story of his small-town life, Fay jumps at something which will delay her life’s failure to launch a little longer. Both jump at the chance to do something which will catapult them out into the night. Especially, it’s implied with genuine and sincere sweetness, if it means they do so together.

With that emotional core, the movie builds out and out into the dark with all the confidence Everett and Fay think they have. Bruce Davis as Billy the caller, takes the movie up a notch. His story, a clever, black and blue collar twin to this, is a monologue about the world these two aren’t quite ready for. A world where soldiers are bussed in overnight to build holding facilities for… something. A world where these men don’t live to see old bones. A world where the truth is ever present and the last thing it will do is set you free. Classic conspiracy thriller fare, and Davis delivers it with the perfect combination of flair and exhausted, world weary anger.

Everett and Fay are exactly where they think they should be, completely convinced of being in the right and hot on the trail of something new and strange. Patterson uses the massive spaces of the state and the tiny locales of the town beautifully and Montague and Sanger’s script is right there with him, framing the movie as an episode of something not quite like The Twilight Zone. That tricks us, drags us in as Everett and Fay are dragged out into the night in pursuit of the sound. You think you know what’s coming.

You don’t. Neither do they.

It’s that level where the movie ends, playing with the uncertainty of living outside your narrative and the narrative you expect. The pair brush up against the trauma of a local resident which has … maybe something to do with what they’re chasing. But it’s also close enough to the truth for Everett to look down, to get scared. For the first time, the coolest cat in Cayuga tucks his tail between his leg and runs.

And Fay goes right after him. The final moments are heart-stopping in a dozen different ways. Everett’s clay feet, Fay’s determination and the bond they share leads to what I can describe as a moment of grace. In a balletic sweep that leaves the earlier tracking shot in the dust, Patterson shows us proof. Undeniable, absolute proof that’s as beautiful as it is terrifying. Then he shows the characters and then, the looking glass is stepped through.

The final moments here — one of the few times the soundtrack comes to the fore — are graceful, terrifying, hopeful and sweet. The Questing Beast is caught. The Truth is here. Everett and Fay get everything they want and nothing they expect. It’s a breathtaking, profoundly moving moment of cinema that twins perfectly with a similar note at the end of Midnight Special.

If you want a double bill of two of the best science fiction movies of the last ten years, these two are it. Both follow humans out into the dark, the brave new world beyond the edge of town. Both are concerned with the human cost and strength of facing the unknown. Both are, fundamentally, about kindness and what happens when we hang on to it.

The Vast of Night is a love letter to a time wrapped with a stern warning to stay in it’s lane. Like Everett, it has a massive heart it hides very well. Like Fay, it’s far cleverer than anyone gives it credit for. And, like both of them, it’s ready for much, much larger audiences.

The Vast of Night is on Amazon Prime now.

Midnight Special, thematically extremely resonant with The Vast of Night is streaming on Amazon Prime and available physically for a ludicrously good price. Both it and its soundtrack shouldn’t be missed.