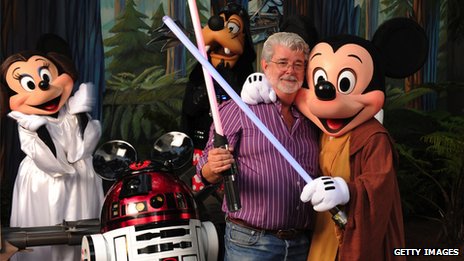 There’s a glorious moment in The Shakespeare Code, a 10th Doctor Who episode where, in a very offhand way, it’s mentioned that Shakespeare has no problem with the company of men. David Tennant grins and says ’57 academics just PUNCHED the air.’
Tonight? It’s the editors’ turn. Lucasfilm has been bought by Disney for 4 billion dollars. Yes, that’s right, Bond villain money got spent today. But what does this mean? That’s the beauty of it. No one has the slightest clue and every droplet of information, every morsel, will be scrutinised in the tiniest detail across the next two and a half years. Hell, I’ll be doing some of it chances are and my relationship with the Star Wars movies turned ambivalent right around the time they went past Return of the Jedi.

But there are two words that have my attention. Those two words that are being thrown around on Twitter faster than the latest Republican party posturing or ‘hilarious’ faked photos of devastation in New York. Two words that cut right through twenty years of critical faculties and training, twenty years of narrative dissection and speak to the overweight, over articulate, unhappy kid who looked at movies the way drowning people look at escape hatches.

I’m not a Star Wars fanboy, at least not in any meaningful way. I love the original three movies desperately, I lost months to the original Dark Forces game and one of my happiest tabletop roleplaying game memories involves the old D6 West End Games edition. Beyond that I was an interested observer, someone content to look at the other stuff but not dive headlong into it. I have good friends who are the exact polar opposite; Whit, in Austin, is a passionate and articulate defender of the prequels as essentially science fiction costume drama whilst Kudos, about forty miles to my East, loves the Clone Wars era so much a friend sculpted his head onto a Clone Trooper figure. I can only imagine how happy they are right now.
For me though, this comes down to three things, or rather, two individuals and a group.

The group is Dark Horse Comics, who’ve been producing Star Wars comics for years and have created a series of genuinely impressive, cut from whole cloth, series. Their work has always been impressive, often pleasingly morally gray and just recently they announced Brian Wood would be writing a new ongoing title for them set between Star Wars and The Empire Strikes Back. Wood is one of the best, and most eloquent writers working in comics today, his Channel Zero remaining arguably the last great Cyberpunk novel. He’s one of the best writers on the planet and the thought of a man as studious and driven as Wood working on a property as light hearted as Star Wars had me giddy. I was, and still am, curious as to what the fate of his scripts will be. After all, the Star Wars franchise is now owned by the same company that own Marvel, meaning they have their own in house comic studio/idea furnace. It’ll be interesting and, I fear, disheartening, to see how this shakes out. Dark Horse have been the go to company for tie in comics for years and I hope the loss of the Star Wars franchise doesn’t hurt them too badly. They’re good people and in the bad old days, when Marvel were going under every single week, Image only published books starring men in body stockings gurning whilst they punched each other and DC were entering their triumph 80th consecutive month of Batman crossovers, Dark Horse were a welcome life raft for comic readers needing a break.

Speaking of needing a break, let’s talk about what happened to defence journalist turned fiction author Karen Traviss. Traviss was hired to write the Republic Commando novels for Lucasfilm and single handedly turned them into some of the most involving military sicence fiction I’ve read. She made the clones real individuals, gave them lives and balanced a plot which was essentially 24 in space with moments of real pathos. They were extraordinary. They were despised. Traviss committed the cardinal sin in many fandoms of being female and alive in charge of knowledge skills and experience and was reviled up and down some of the more extreme fan communities for daring to know how a multi-front war would be fought and won. Her time at Lucasfilm was rocky to say the least and she left under a cloud, her work either ignored or retconned. I know fans who’ve never forgiven the company for that, and with good reason. Your talent may not be bigger than your trademark but without your talent, your trademark dies. And if your trademark dies, the House of Mouse doesn’t buy it for four billion dollars arguably a good decade after its last, questionable, day in the sun. If the Disney merger means that authors like Traviss are guarded and protected as the assets they are, then this is surely a good thing.

Then there’s me. As I write, a vast army of my colleagues are sharpening their swords for the two and a half year brushfire war with an indestructible film, safe in the knowledge that if they proclaim the intellectual death of Hollywood loud enough, no one will mistake them for having any fun. Episode 7 is a walking target, it’s the Leviathan at the end of The Mist, impossible to miss and impossible to damage. This movie will suck all the box office revenue for its run into itself regardless of how good it is and no critic on Earth can change that, therefore a lot of critics hate it already, refusing to entertain that single question that lies at the heart of this;

What if it’s good?
I so, so desperately want it to be good. I want it to be fun, to embrace that two fisted sense of pulp mania that I chase like the bloody Questing Beast through most of the stuff I read, or watch, or listen to. My dad used to love seeing me come out of movies with a friend because the cinema on the Isle of Man was at the top of a huge flight of steps, I assume to stop fishing boats accidentally parking in the lobby. He and mum would sit in the car at the bottom of the stairs and Dad could always tell when the movie was good because he could see my smile the moment I left the cinema. He calls them ‘Silly grin movies’. I didn’t have any for a long, long time and this year I’ve been spoilt with three; The Avengers. The Dark Knight Rises and Cabin in the Woods. All of them gave me that pop culture sense of giddy, that joy at seeing a confection well spun, of the vase of flowers still standing after the table cloth is whipped away. All of them gave me a silly grin.

Disney owes me a silly grin. I’m looking forward to seeing if they deliver it in 2015.