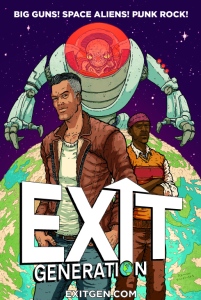 Sam Read‘s Exit Generation (Spoilers on that second link by the way) was one of the best comics I read last year. And that’s a big field, I mean I read 334 comics last year. The Pinterest board’s over here.

Exit Generation  is the story of the end of the world, what happens after it and what happens when a very different apocalypse rears its head. Stylistically it’s a little like District 9 crossed with 2000AD, a story set on a Quiet Earth about a man who wants some noise and what happens when he gets it. Sam’s script is spare, elegant and cheerfully OTT when it needs to be. Caio Olivera’s precise art renders the characters in exactly the way needed and Ruth Redmond and Marissa Louise’s colour work helps ground the story in the pragmatism it needs to work. Colin Bell, one of the best letterers in the business, does typically great work here too while Adam P Knave, who’s own Amelia Cole books you also absolutely need to get, has a light touch as the editor.

It’s brilliant, it’s comics with guitars as the genre was once described and Sam and team put it out on their own. Indie comics publishing is TOUGH and the fact they did something this good and finished it is a mark of just how talented they are.

It’s also clearly got them noticed because ComixTribe are now putting the book out. This is excellent news and it also gives you a chance to pre-order the book and help Sam, your local retailer and yourself out all at once. Here’s what you do:

Go to your local comic shop. If you can’t find it, try here.

Ask to pre-order Exit Generation issue 1 and give them this code:

And in two months, you’ve got a book! Win!

The one thing I would say is due to the vagaries of the comics industry the pre-order cutoff is in a couple of days so please do this sooner rather than later. If you don’t, there’s a chance you’ll still get the book but it’ll be much harder for everyone involved.

So make life easy on everybody and pick it up, using