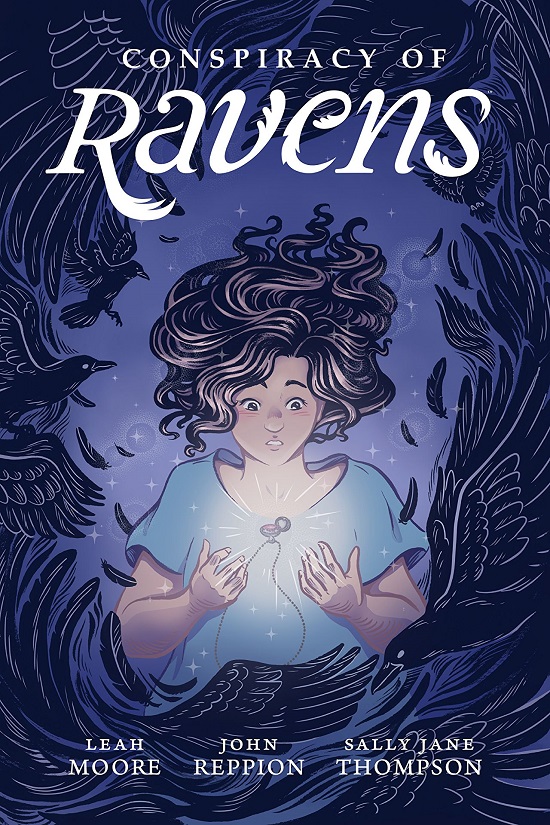 Leah Moore and John Reppion are part of that elite cadre of writers who seem physically incapable of turning in bad work. Endlessly versatile, always grounded and always with an eye on the rich and strange. Sally Jane Thompson is right there with them too, an artist whose work I’ve known and admired for years and who has an effortless ability to capture character and voice. Alone, their work is impressive. Together, it’s extraordinary and that’s exactly what A Conspiracy of Ravens is. Along with Niki Smith, whose tone work gives the book the feel of a cold, strained winter morning, they’re the perfect team for this story.

Anne Ravenhall and her best friend Binky are watching each other’s backs through the dangerous waters of boarding school. When Anne inherits the family seat however, their lives become far stranger. Anne, it turns out, has a heroic destiny. And so do some of her classmates…

Moore and Reppion have a tremendous lightness of touch and that’s one of the qualities that makes the book fly. They stage each one of the reveals carefully and never rob Anne, or Binky, of the agency they need to make the book work. Crucially too, they never lose sight of the fact their leads are teenagers. My favorite beat in the book deals with the strain that Anne’s past puts on her friendship with Binky. My second favorite is the way they explore It Girl Felicity Jay’s growing discomfort with her social status. This is a story about people trying to work out who they are and about bird-based superhumans, never the other way around. Moore and Reppion make you care about the characters first, then show you what they’re going through.

That also means that when the book cuts loose it really cuts loose. The powers the girls inherit are given a wonderfully tactile, feathered approach by Thompson who also excels in the smaller, character moments. The leads are all different body shapes too which is immensely refreshing in a book like this in particular and also cleverly folds back into the central plot. This is a story about normal teenagers discovering something extraordinary. They look, and talk, like people you know and that makes them easy to cheer for. The fact they all screw up from time to time, doubly so.

Most of all, what really shines through here is the book’s heart. This is a story crammed with action, massive ideas and character and all of it is driven by the choices the leads make. It’s a story about people becoming who they are and surviving what they need to, as well as about bird-motif superheroes kicking people in the face. The fact it does both so well is no surprise given this team. Endlessly confident, smart, funny and compassionate, this is the first graphic novel I read in 2019 and it’s set one Hell of a standard.

A Conspiracy of Ravens is available now. You can find your local comic store here, you can find mine here and you can find the book on comixology here.