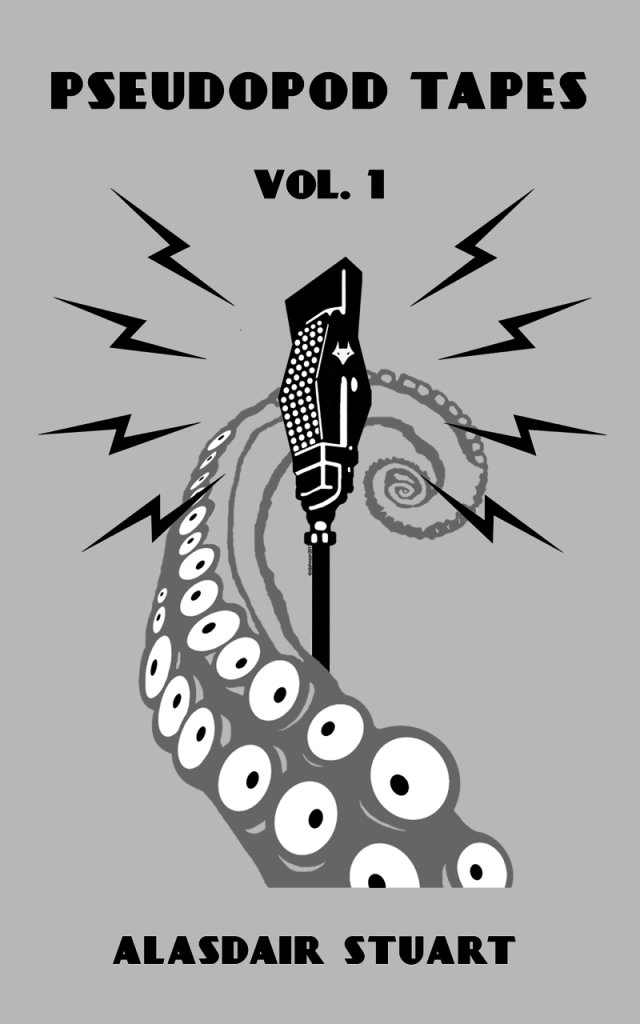 Isn’t that lovely? I am a sucker for old school microphones and the tentacle wrapping around it is just beautiful. That’s the work of S.L. Johnson, cover artist and genius. See the little Fox head on the mike? That’s the symbol for Fox Spirit Books, Adele Wearing’s publishing company who are putting the book out. Fox Spirit have got some amazing books on the roster and I’m in frankly humbling company, so I’m delighted not only that my first book (MY! FIRST! BOOK! THAT’S A REAL THING THAT’S HAPPENING!) is coming out but also coming out through them.

Good question Socratic dialogue version of me! It’s every endcap essay from this year, from Pseudopod. Every week I hosted the show, I wrote a short essay about something in the story that I’d noticed, or how the story had made me react. It’s a format I’ve sort of fallen into by default and I’m really pleased with how it works on the show, especially as it lets me simultaneously flex my critical muscles and spend some time leading the applause for the author and the story, which are, let’s face it, the stars of the show at Pseudopod.

Here though, it’s all on me. So, each one of the essays has been massively revamped, expanded and in a couple of cases completely rewritten to stop you constantly having to refer back to which episode I’m talking about and also to take advantage of a format where I don’t have to segue to a call for donations after 500 words. This was a good chunj of what I did during NanoJourno and the end result is 40,000 words worth of very largely new material.

In addition to the main essays there are two appendices. One is a complete listing of every ending quote from every episode which will, when read in order, confirm my deep fondness for Supernatural, the ’70s hair rock that the soundtrack to that show is crammed full of and Planetary. The second appendix is a complete breakdown of single inhabitant of this year’s Halloween parade, with running commentary on both.

We’re going to be publishing in ebook format for $5.99, and there’ll be a createspace option for anyone who wants a print copy too. Nearer the time, as in, in a couple of days, I’ll put up a post with full details of the launch date, the blog tour I’m going on to help promote the book and exactly when, and how, you can buy it. There’s a lot of work still to do, but not for now. For now, all that matters is that this is done, a thing I made is ready to go out into the world. I can’t wait to see what you think of it.